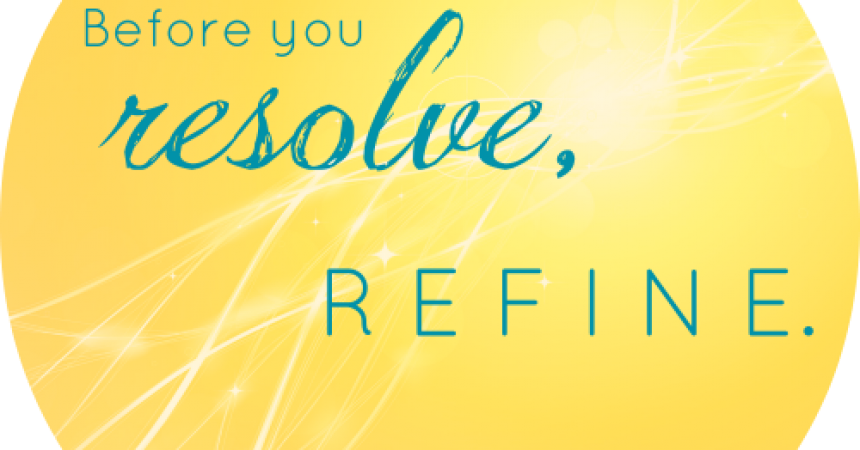 I’ve always been a sucker for starting new projects, so to me, no time of year is more exciting to me than the New Year. The year is still a blank slate, filled with unlimited potential and promise. For a dreamer and project-starter like me, it’s the perfect excuse to come up with new ideas and try on new ways of living.

But over the last few years, I’ve noticed that sometimes all this resolving can put the cart before the horse.

In the rush to embrace the possibilities of a fresh year, it’s only too easy to trample right over the progress I’ve already made on goals I set last year, shoving them aside to make room for the much sexier prospect of new: new resolutions, new goals, new priorities.

Sure, on January 1 it’s easy to feel bloated and lazy and unmoored and a little wistful and just wanting to scrap it all and begin again. But maybe, this year, we don’t so much need another new start.

Maybe instead we need to see all those old-new starts through to the end.

Instead of barreling right over all those irons-in-the-fire – some already thriving and gaining momentum, some delicate and tenuous in their newness and my lack of commitment – I’m looking at this New Year as an opportunity to focus on refining instead of resolving.

I’m planning to identify some places where I could make gentle improvements, see existing commitments through to the end, and do a better job with the projects and plans I’ve already made.

Instead of mapping out a brand new fitness plan, I can refine my current efforts by becoming more consistent with my weekly workouts and pushing myself in small ways. Spend another five minutes on the elliptical. Work on improving my form in yoga class and holding that plank just a little longer. And instead of signing up for three new yoga classes, I can make a point of getting to the one I’m already attending every single week.

Instead of embarking on a completely new way of eating, I can recognize how much a better cook I have become over the last year, and look for small ways to make my current repertoire of meals a little more nutritious.

Instead of planning to launch a half-dozen new work projects or find a bunch of new clients, I can do a better job with the projects and clients I’ve already got.

In general, I can do fewer things, better.

While I understand the excitement and appeal of brand-new ideas and plans and goals, there is just as much – perhaps more – need in my life for adjustment and improvement and seeing things through. And that’s my focus for today, and for the rest of 2014.

I suppose you could say I’m resolving not to make new resolutions, but instead to refine the life I’m already living, the things I’m already doing.

And once I’ve made a plan for seeing things through and finishing what I’ve started, there will be more room in my life for the new: new ideas, new projects, new goals, new plans.

Who cares if I don’t get around to the “new” until February or March? I’ll still have the satisfaction of having made improvements and done the best I could with what’s already on my plate.

So if you’re feeling overwhelmed by the idea of making New Year’s resolutions – or a little uneasy about your long list of unmet goals from last year – why not shift your focus to refining instead?

It might not be as exciting as making a list of new projects and goals, but in the end, the satisfaction of seeing things through is totally worth the effort.