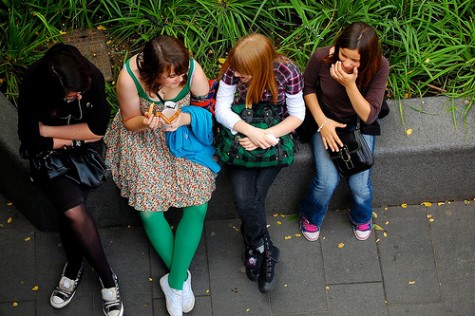 Does trying to get in with the cool playgroup moms make you feel like you're in junior high again? Photo Credit: Christiano Betta

So you’re new to town and haven’t been able to find a group to wiggle into? Or maybe you’re not new in town, but new to your preschool or daycare scene, and though you’ve been trying for months to make headway with that gang of gals whose kids have known each other from the womb (they were all in childbirth ed together, and have kept the gang intact since) but there just doesn’t seem to be any room for a newcomer?

1) Don’t take cliques personally
My friend Toni dealt with “new girl syndrome” when she moved to the small town of Woodstock, IL while pregnant with her second son, Nolan, who’s 8 years old. And while she knew nobody in town until her oldest son was in preschool, even then Toni experienced some discouraging false starts–like when a mom she was talking to at a coffee date actually swiveled her chair around mid-sentence, turning her back on Toni in order to strike up a conversation with another mom. Ouch.

Hinting around didn’t help much, either, Toni told me. “Many of them formed a book club and I would say, “Hey, I’d love to be in the book club” but never got an invite. Yes, I checked my ‘pits for telltale odor, teeth for spinach, and shoes for trailing TP.” Though she wasn’t smelly, green-toothed or dangling any paper products, Toni never made much headway with a certain set of moms–and though it stung, she learned not to take it personally.  “It’s tough to crack existing cliques; not because we smell or are inherently unlikeable, but rather because existing friendships often don’t need to expand. Members of cliques are choosing each other more than they are trying to reject outsiders.”

In other words, it’s not about you. It’s about them. Don’t let it get you down–but definitely move on if you keep getting the cold shoulder. How?

2) Think outside the mommy-group box
Your people are out there. I promise. But often we get so hung up on the potential friends right in front of us that we forget there’s a whole wide world of different kinds of people out there–yes, even in a small town. When you’re dealing with a clique, you aren’t likely to find future friend prospects hanging out at the so-regular-it’s-nearly-school-sanctioned Wednesday afternoon post-kindergarten park playdate, or chatting around the preschool lobby. Why? Because if the moms who frequent those hot spots present themselves as a closed group, chances are a lot of the other moms have felt snubbed, too, and have stopped hanging around.

Instead, get involved in activity you enjoy: join the local chorus, take a yoga class, or volunteer someplace that has nothing to do with your child’s school or sports team, like a political campaign, an environmental cause, an animal shelter or food pantry. Not only will you be sure to meet other people who share some of your values and/or interests, but this is the best way I’ve found to break out of those parent-clique dynamics. You’ll also meet people of a range of ages and backgrounds, which is a big part of creating a rich and diverse social life: “in the same boat” mom friends can be a great part of your support system, but so can older people, veteran moms, and childless friends.

3) Give it time.
The older my kids get the easier it seems to be to meet new people–they’re involved in more and more things, and since they’re more independent I can actually sit and chat with the other moms instead of always having to keep one eye trained on the kid. Also, those mom cliques seem to loosen, or at least seem less important, as children get older and their interests expand.  That’s been Toni’s experience as well: “Now that my two younger boys are at a new elementary school, I’m starting to meet the moms of their new friends and I can see potential friendships happening there, too”

4) Keep trying. (It’s worth it.)
I alluded to this yesterday, and Toni agrees: if you want to meet people, you have to put in the effort. “No matter how shy you are, you’re going to have to put yourself out there, whether it’s attending preschool coffees, library reading groups for infants/tots, PTO meetings, or volunteering elementary school functions. There are also great organizations like La Leche League and MOMSclub.org that provide opportunities to get out of the house and meet like-minded parents.” Squeezing in one more activity might seem like more hassle than it’s worth, but in the end, your friendships should give back more than they take away. As Toni wisely puts it, “Make the effort because you are worth the effort.”

5) Move.
Yeesh, that’s a bit of a dramatic solution, isn’t it? But if you’ve tried everything and have waited patiently and just can’t seem to find any like-minded people, it may be that you’re just in the wrong place. I don’t necessarily mean that you should pack up your belongings and head to a new city, but you might want to try a new church, daycare, school, or neighborhood park: one where the people are friendlier, or just seem to have more in common with you.

And if your current town is a lonely place for you no matter how much you’ve tried, I think that’s an absolutely valid reason to head somewhere else. There’s no shame in heading back to the hometown you left in a huff after high school because now you’re realizing how much you miss your cousins and parents. Or if you just know you’d be happier in the big city or that organic-farming planned community you keep hearing about, by all means, take control of the reins and make a plan. No family can be an island, and our relationships–all of them–are the fabric of our lives. Do what you can to make that fabric as strong as it can be–it really is worth it.

Have you dealt with mom cliques or new-girl syndrome?

Thanks to Toni for sharing her thoughts on motherhood and friendship! Be sure to check her soon-to-launch site Outdoorsy, which is all about getting people out and enjoying nature. You can subscribe over at Toni Writes to be sure to get updates when it’s launched!