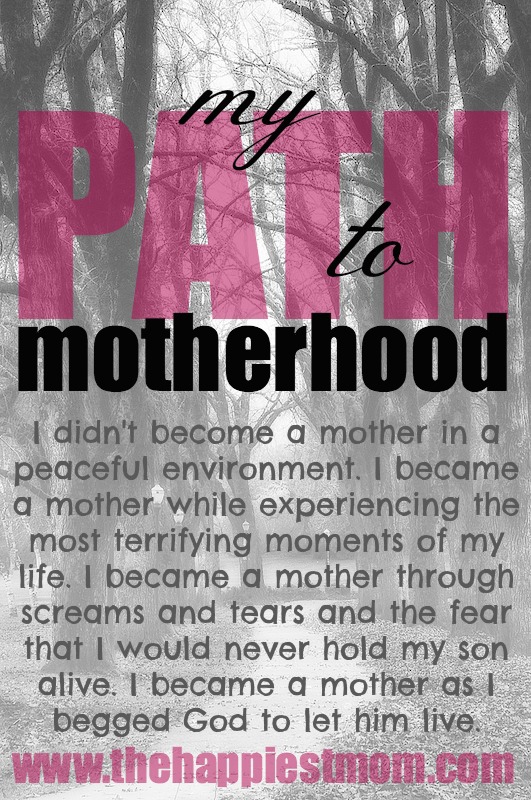 I touched my 39-week pregnant belly, placing both hands beneath the swelling bump. It was the night before I was to be induced and I couldn’t sleep.

My first pregnancy was painful and exhausting. But it was also the most beautiful experience of anticipation I have ever felt.

Everyone I knew that had kids talked about this phenomenon that happened when you became a mother. They told me that the bond was instant. They discussed the births of their children as if they were monumental, life-changing moments. I hoped mine would be like that.

We’ve all seen births happen on television and in the movies. This beautiful moment happens when the brand new baby is placed in their mother’s arms pink and screaming. That’s what I pictured. Half the fun and angst is not knowing what your birth will be like. We all want control and we all think we’ll have it. But it doesn’t always end up that way.

We arrived at the hospital just as the sun was rising for a routine induction. I was already four centimeters dilated and my OB told me that she would just need to break my bag of waters and we would be off on our birthing adventure! She was right. The second they broke my water I began feeling intense contractions.

The epidural was placed almost immediately and I enjoyed my time laboring with friends and family circulating our hospital room. Hours later I was ready to push. I had always imagined pushing for maybe thirty minutes tops. Unfortunately that would not be the case for me. Two and a half hours later I was screaming in pain, begging for the doctor to get the baby out of me. I was physically exhausted and didn’t know how much more I could take.

Suddenly the doctor told me to reach down and feel my son’s head. That’s all it took. I gave it my all on the next push. The biggest exertion of my life. And there he was. But I was surprised he was so blue.

I waited for him to cry. I watched as the doctor passed him off to a nurse. My eyes followed my son’s every move. They put him in the isolette. Precious seconds were passing and still I had yet to hear him cry. “Why isn’t he crying?” I asked over and over and over again until a minute had passed and I was screaming the words. That’s when I realized he was not breathing. They began to resuscitate him.

The nurses pressed on my stomach trying to help me deliver the placenta. It hurt so badly as I lurched and cried for my son. Extra workers rushed into our room but it all happened as if I were in some dream sequence. Was this really happening? Was my son going to die as I lay on that hospital bed?

“We have to take him to the NICU,” a doctor in blue scrubs said. They whisked him away and I became hysterical.

Where was my moment? The one everyone had talked about? Why wasn’t I holding my son? It felt like an internal organ had been ripped from my body and I was dying. I couldn’t breathe. I couldn’t see from the tears. I grabbed onto my husband and cried, “Please don’t let our baby die.”

Then I went somewhere deep inside me. To a place where I prayed for the first time in a long time. I prayed to God to spare my son. If you have to take someone . . . take me instead, I asked.

Since we hadn’t heard anything in an hour, the most horrific hour of our lives, my husband went to the NICU to check in on the situation. I was not expecting what would come next.

My husband walked through the door with our perfect, pink and very alive son. I reached out my arms as far as they would go and my son was placed gently into my arms as I cried harder than I ever have.

Our son is now a healthy four and a half-year-old. But I must say, enduring such a traumatic birth helped to shape the mother I am today. I try to live in the moment and appreciate him even when he is pushing the limits. I know how very close we came to losing him. Those scary memories have given me powerful perspective. I will never forget the moment I became a mother. Even though it was not the birth I expected it made me the mother I am today.

Molly Shalz is a working mama to two beautiful and sweet boys born 21 months apart. Yes, she survived a stint of two under two! Molly has a degree in journalism and began blogging in 2006 when she realized how much she missed writing. A blog seemed like a convenient space to continue journaling.

Over the span of five years, Molly’s blog has gained a loyal readership. She was nominated as one of The Bump’s Best Working Mom Blogs. Her writing also earned her a coveted BlogHer Voice of the Year award. She continues to build her audience by writing passionately about her journey through motherhood while also suffering with depression. Molly is also writing her first novel.