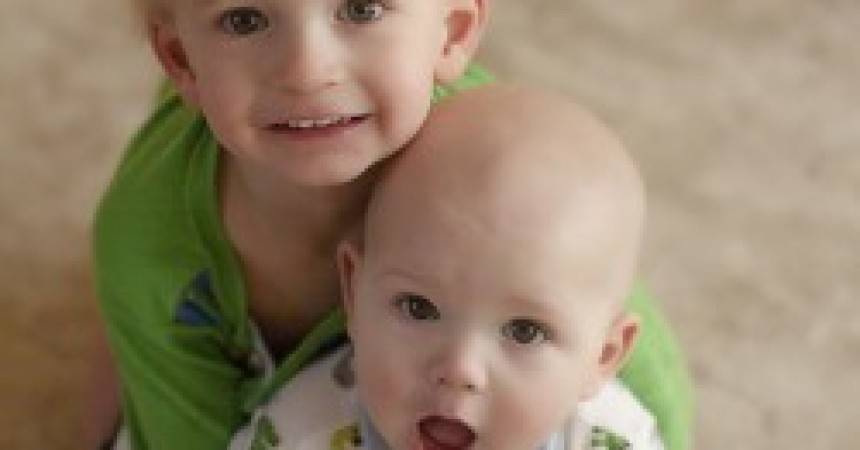 This post is part of our reader-submitted guest post series, My Path to Motherhood. For more on the series and how to submit your story, read this post. If you missed the first post in the series, click here to read it. 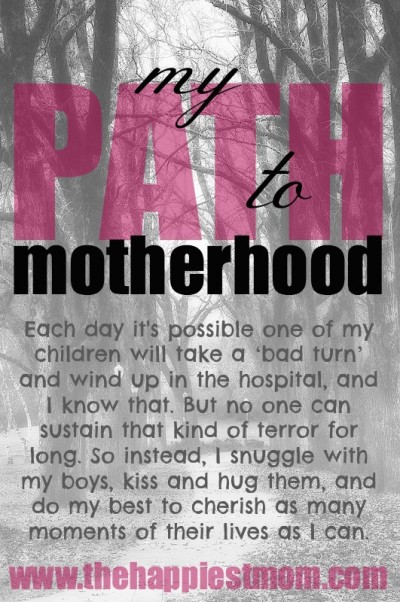 Sometime around my 24th birthday, my knowledge that I wanted children went from “someday” to “RIGHT NOW”. I blame hormones. Still, it took me 9 more years to have my first child.

That was lesson one: patience.

My first pregnancy was perfect! I was one of those annoying women who LOVED being pregnant and had no ill side-effects. I even went into labor on my due date! How perfect is that?

Turns out, far from perfect. I was in labor for 4 days, and after a delivery that utilized every intervention I knew of short of the C-section, my son was born with a purple-black hue to his skin, barely breathing, and was whisked away by the NICU almost immediately.

My vision of a water bath birth with a midwife gently talking me through a natural, drug-free delivery, followed by immediately nursing my perfect, healthy child began fading away the minute I started labor, and what remained of that dream went POOF when I realized my son had an APGAR of 2 and didn’t cry for the first 3 minutes he was alive.

That was lesson two: expect the unexpected.

At 5 weeks old, my son presented us with bloody diapers. It was only my second day to be alone with an infant in my life; I felt overwhelmed at the idea of just keeping him fed, changed, and alive – let alone handling a scary medical threat! Still, I held it together, got him the medical care he needed, and we started on our continuing journey into food allergies and intolerances.

That was lesson three: get comfortable outside your comfort zone.

Our second child was born a scant 23 months after our first, and his delivery was a far more pleasant experience. I only labored for 40 hours that time! He was born with the umbilical cord wrapped around his neck twice and an APGAR of 2, but his situation was far less dire than his brothers and we were sent home barely 24 hours after his birth. My husband and I were so relieved to have dodged the “NICU bullet” this time around, and so grateful that our medical problems seemed to finally be behind us.

(Can you guess what happened next?)

Yes, at 5 weeks old, our second son presented us with bloody diapers. We had only barely started sussing out the cause of that when, at 7 weeks old, he got terribly, terribly sick. On a horrible Thursday night, we were helicoptered to the nearest Children’s Hospital, 4 hours away.

That was lesson four: get used to being afraid.

We spent a week in the hospital, where our baby was diagnosed with pneumonia immediately and FPIES (Food Protein Induced Enterocolitis Syndrome) as we were released to come home. Back home, we reeled from the diagnosis and what it meant for us: this is a very rare disease with no cure (except to possibly outgrow it) and the only treatment is to avoid all “trigger” foods.

The only problem is that at 7 weeks, old, we had no idea what my sons “trigger” foods were! I had already been dairy and soy free since my oldest turned up with bloody diapers two years earlier, so I began a strict elimination diet to help find a way to keep my son alive and healthy.

That was lesson five: expect to sacrifice in BIG ways. 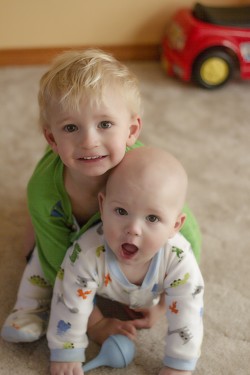 Now, my youngest son is 9 months old and he and his brother are stable and healthy. We still haven’t been able to feed him solid foods yet, because his intestines haven’t been healed up enough to risk exposing them to a new protein that could put him in the hospital again. However, we’re hopeful that soon we can start him on a probiotic and a few weeks after that, his first food – quinoa!

I’ve had to read medical literature that forces me to use phonics to understand the words, travel to another state for medical care, eliminate everything except 5 foods from my diet, and endure scrutiny and criticism from people who refuse to understand my son’s illness and accuse me of starving him.

Through all of that, my husband and I have had to stand firm in the resolve that we are doing what is best for our children regardless of what anyone else says or thinks.

That was lesson six: learn to advocate and stand strong.

My path into motherhood took longer than I expected it would, and has been far from the “Leave it to Beaver” sitcom perfection I thought it would be. My children have some serious health issues that have permanently changed our lives. Things that most mamas take for granted – like watching their child eat a slice of pizza – bring me tears of joy.

Each day is possibly a day where one of my children will take a ‘bad turn’ and wind up in the hospital, and I know that. But no one can sustain that kind of terror for long.

So instead, I snuggle with my boys as often as I can, kiss and hug on them, and do my best to cherish as many moments of their lives as I can.

I wouldn’t change a thing.

Carrie is the lone source of estrogen in the male dominated Cradle household; chief cook and bottle washer, medical advocate and diaper changer. She also earns her kibble as a Flight Attendant.  She blogs about Real Food, FPIES, Fructose Malabsorption, Family, and life with two AMAZING little boys at www.cradlerockingmama.com.