This guest post is the first in our series, My Path to Motherhood. For more on the series and how to submit your story, read this post. 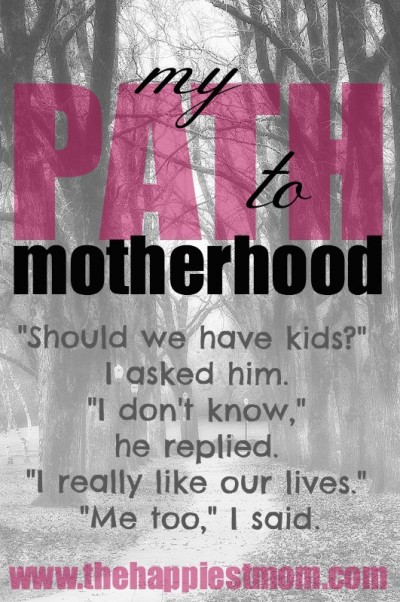 The year was 2003. My husband, Andy, and I were living in Guadalajara, México. We were having the time of our lives, soaking in a foreign culture, traveling to the beach every other weekend and entertaining house guests from our home country. One morning, driving in the company-issued Ford Taurus on our way to work, I asked Andy, “Do you think we should have kids?”

“Yes, eventually. But not this year. This is too much fun. I like our lives.”

The year passed, we moved back to the United States. We discussed having a child again and decided it was a good time. I quickly became pregnant and our lives changed. We immediately shifted our focus from weekend trips and tequila to family cars and cribs.

Before we knew it, we’d had our first ultrasound, which revealed there was no longer a baby. As long as I live, I will never forget the nurse’s tone of voice when she said, “Oh sweetie, I’m soooo sooooorry.” It took me a second to understand what was going on, but I knew I never wanted anyone to call me sweetie again.

Too impatient to be done with the experience, I had a DNC rather than waiting to miscarry naturally. It was all over. We grieved but then moved on.

I immersed myself into an MBA program. I often asked my husband, “Do you think we should try again to have a baby?”

His response was consistent for the next two and a half years, “Not until you finish your MBA.”

I knew he was right. With a demanding full time job and an MBA program, there was no time for a pregnancy or a newborn.

Before I finished my MBA, we moved to Shanghai, China on a work assignment. I was able to finish my degree remotely but then my spare time was spent learning Mandarin and spending time with all of the interesting, new people we met on a daily basis.

For my 30th birthday, Andy threw me a big party at a German beer house on the other side of Shanghai. I distinctly remember wondering if the milestone was the beginning of a new phase of my life, a phase with kids.

After that day, my line of questioning shifted, “Do you still want to have kids?”

His response, “I don’t know. I mean, I think so, but I really like our lives.”

“Me too, but I feel like we need to consciously decide that YES we will have kids or NO we will not, but not just let the time pass because we are having too much fun.”

He agreed with me.

The following year, we traveled to Japan, Korea, Singapore, Cambodia, Vietnam, Taiwan, Dubai and the Maldives. I received a promotion and moved back to the US early to take the job. Andy came home for two weeks in July to visit me. He was scheduled to move back in September, but we were going to meet in Thailand in August and rent a sailboat and leisurely sail between islands in the Andaman Sea.

There was a crisis at work and I had to cancel my trip to Thailand. It was too late for a refund on the boat so Andy took the trip without me and spent a week on a boat with a Thai skipper who spoke no English. The day Andy boarded the boat, I took a pregnancy test and it was positive.

I had no way of getting a hold of him and had to keep the most exciting news of our lives from him for nearly an entire week. When we were able to talk on the phone five days later, I immediately shared the good news. His response was classic, “That is so exciting, but I was kind of hoping to try a little longer.”

Even before we laid eyes on our daughter nine months later, we knew we had made the right decision. We loved our lives before having kids, but having a child and becoming parents was going to take us on a whole new set of adventures.

I often hear couples wondering if having kids is right for them because they like their lives as they are sans kids. Sometimes I bite my tongue, knowing that each couple, each person, needs to figure out their path to or away from parenting. Still other times, I pipe up and share that we liked our lives before kids, A LOT. But from our vantage point right now, as parents of a two- and four-year-old, having kids is, by far, the coolest thing we have ever done and that we would make the decision to become parents again, a hundred times over. Our girls make us better people and we cannot wait to show them the world.

Alecia Hoobing is a project manager at a high-tech company, a freelance writer and is the mother of two charming young girls. She enjoys traveling, running, yoga, cycling, reading and spending time with her friends and family. She blogs at Hoobing Family Adventures, Runner Mama and Traveling Mom.