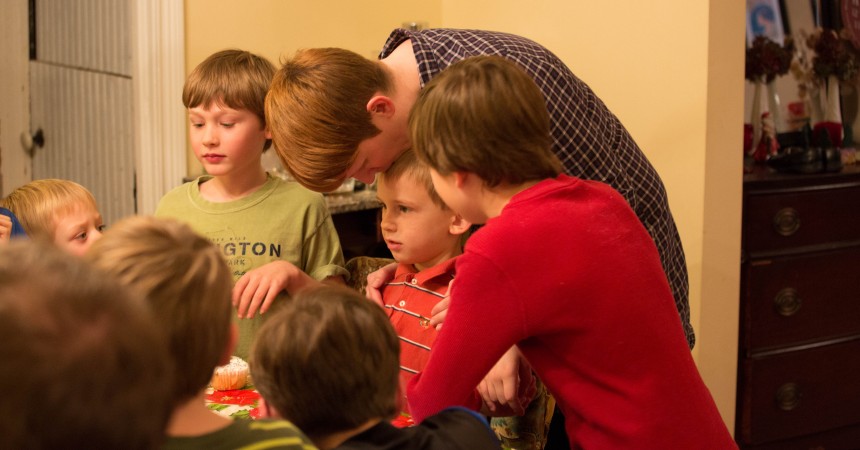 Very cool animated photo courtesy of my husband Jon and Flixel.com. Taken the next day, because we realized we forgot to get a good blowing-out-the-candles shot on her actual birthday.

You all know my feelings about “good-enough” kids’ birthdays, right?

I’m not opposed to fancier, more organized shindigs with themes and gift bags and bounce houses, but with five kids – four of whom have birthdays in the same season – we opt for simple, laid-back parties nine times out of ten. No theme, no elaborate decorations – just the birthday child, a few gifts, a homemade (and decidedly amateur) cake.

But this week, Clara turned five. And five – particularly for the youngest child in the house – feels like a particularly momentous birthday. Besides, with the dreary weather we’ve been having lately, I felt like we could all use a little fun. So I decided to go a little bit outside my comfort zone by planning a party with themed decorations! And an ambitious cake!

And what I found? A slightly more thought-out party really didn’t add any stress to the day.

I started by sneakily planting a theme idea. I still had a Hawaiian party pack left over from my BlogHer swag bag, so I got out the leis and showed them to Clara to get her excited about a luau theme. She bit!

From there it was easy to pull together decorations and party favors. I ordered a few packages of “grass” skirts for the kids and picked up a banner and centerpiece from the dime store downtown. We settled on a day and time for the party – on Clara’s actual birthday, which fell on a Thursday, around dinnertime. I considered having the party on a Saturday, but knew that then I’d be tempted to expand the guest list and I wasn’t sure I wanted to do that.

Thursday morning came along and Clara was beside herself with excitement. I attempted to French braid her hair for the first time, and it sort of worked. I let her dress in summer clothes with a tropical print (in one of her favorite tops, from Tea Collection) and cranked the heat up a few more degrees to make up for it. I made her quiche, her new favorite food, for lunch (hey, I’ll take it!) By 2 PM she was ready for the party – which wouldn’t start for several more hours – and already practicing her hula dance skills.

Then it was cake time. I’d let Clara look at cakes on Pinterest (risky, I know) and she’d been attracted to the cakes that looked like a beach scene. I liked the concept because I wouldn’t have to create any frosting flowers, a skill for which I am lacking the gene. So I bought a set of beach scene cake toppers and improvised by adding with our collection of seashells (after running them through the dishwasher set to “sanitize.”)

After that, I just had to make some green-blue frosting and create the sand: a handful of Nilla Wafers and a handful of shortbread cookies with a couple of tablespoons of brown sugar, ground up together in the food processor. It was crazy how much it actually looked and felt like sand!

Here was the final result: 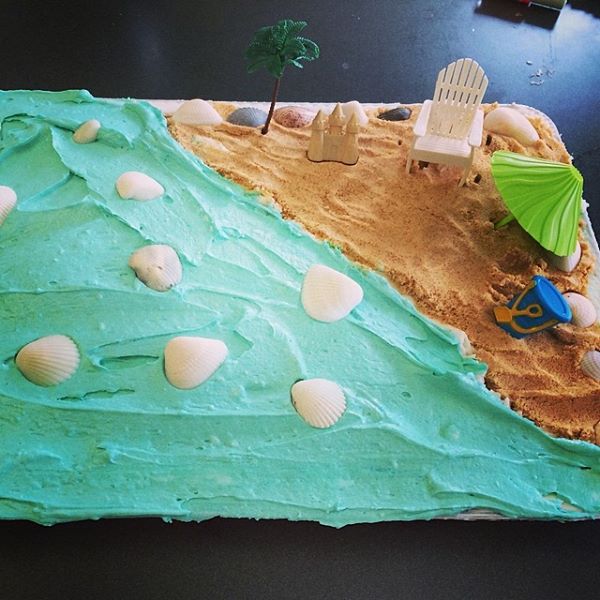 Believe me, I was just as surprised as you might be. The cake actually looked…good! And it was so easy to pull off!

Incidentally, while I almost always bake birthday cakes, this time around we decided to buy a sheet cake from the supermarket bakery. I felt the cake needed to have a lot of surface to really pull off the beach effect, and my biggest cake pan is 9 X 13. The thought of making two cakes and trying to stick them together was more than this novice cake decorator could handle. I had a ton of extra blue-green frosting, so I made some chocolate cupcakes (from a mix) at the last minute.

Anyway, the party was about as laid back as is usual for us – the guests were Clara’s brothers, cousins, and the little boy of one of my best friends, who’s known Clara since she was born. The adults hung out in the kitchen and talked, sipping tropical drinks with umbrellas in them, while the kids watched Frozen (Did you know you can stream it now, before it comes out on DVD? Another reason to love Amazon Prime!)

We ordered pizza (including Hawaiian pizza to keep the theme going) and the kids each put about seven toothpick umbrellas in their cups. Clara opened a few gifts, then the kids played some more, then we cut the cake (which got the oohs and aahs I was hoping for.)

You know, now that I think about it, Clara’s party was very much like the ones our family has always had. Simple, with just a few family members and friends around the table. Laid-back, without organized party games or a schedule. This year, it just looked a little prettier.

I like challenging myself, sometimes, to try something new. And now that my kids are growing up and I have more time on my hands to try new things, I can see myself taking on more challenges with decorating and cake-making.

But I think our birthday celebrations will always tend toward the simple, the quiet, the family-friendly. It’s what feels right for us. It’s what keeps me from stressing out on the big day.

And, as it turns out, it can still make a five year old girl very happy indeed.