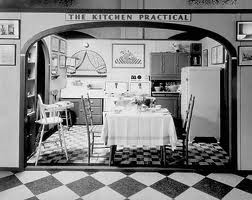 Lillian Gilbreth felt that a simplified kitchen would lead to more "happiness minutes" for homemakers.

One of the things that’s come up a few times in the past few week’s discussions about homemaking and hired help is the role of technology in making life easier. (Or not.) While I was searching around for some data on household help in the early 20th century, I stumbled across this fascinating article by Mary Ann Buschka at CUNY, about Lillian Gilbreth, the mother of twelve featured in the famous book Cheaper By the Dozen. Gilbreth was also an industrial engineer and psychologist who did extensive work in the fields of time management and efficiency; she is even credited with the concept of the kitchen “work triangle”.

The full article is a really interesting read, but I’m going to share the section I found most striking (boldface added by me):

“Gilbreth summed up the goal of efficiency in the home as more “happiness minutes.” This would have seemed silly to an industrialist, but Gilbreth could see no better way to measure the overall result of having a more efficient home. Happiness minutes occur when the homemaker is rested. When the household paperwork is organized and the bills paid on time. When meals are planned and not stressfully thrown together at the last minute. New time-saving appliances gave homemakers more freedom–the freedom to take on more jobs, to make cooking more complex, to make the house cleaner, but at a resulting price of having too much to do and fewer minutes of happiness.

…When electricity and gas were introduced into homes in the early twentieth century, they replaced elbow grease as the main power behind many household jobs. Yet, the appliances frequently meant that effort was expended elsewhere…Ranges that allowed varying temperatures on various burners also allowed for cooking more complicated meals. Stew and soup were fine sometimes, but fancier dishes with individual components–separately cooked meats, vegetables, and of course desserts–became the standard in modern cooking. This meant more time in the kitchen, more preparation time, more standing at the range or countertop, not less. The vacuum cleaner was another thrilling invention that replaced the need to take out rugs and beat them. Of course, rugs were very infrequently taken out, as this was a time-consuming and difficult job. However, vacuuming could be done frequently, even daily. The vacuum was a very handy invention, but one also had to carve out time to complete this new household task. Technology in the home was, as it still is, a double-edged sword, cutting work time in some cases, while adding chores and strain in others.

…Disorder and the stress resulting from it, Gilbreth said, was the primary cause of fatigue, both mental and physical. It came primarily from two sources: a cluttered, disorganized home and a lack of a plan for activity. A new technology like an electric egg beater could be more fatiguing to use than a wire whisk if it was stored in the back of a cabinet and was hard to dig out and put away, or if it needed to be cleaned meticulously before and after every use. Too many appliances, cluttering a countertop, Gilbreth explained, would become counterproductive if they took away a workspace needed for chopping or mixing or if they just made it difficult to find things. Gilbreth suggested that all appliances may not be necessary. There was, she believed, such a thing as giving in to all the sales pitches out there too easily. If one bought and deemed an appliance worth keeping, only the ones that were used almost daily should be out in plain sight and reach.

A homemaker’s daily and weekly plan for work was also turned on its side by the industrial age. Beforehand, Mondays were washdays, Tuesdays for ironing, and so forth because these were all-day activities before the washing machine. Now, the convenience of a labor-saving appliance meant that any day, any time, could be wash-day. Wash might be done more frequently than once a week. Mondays need no longer be set aside, so new activities could creep into the schedule. With the advent of the automobile, women also could dash out of the home on errands. This was convenient, but also made it harder to stick to a plan. So many possibilities, so many things to do. This was mentally as well as physically fatiguing.”

Wow. So much to think about! The egg beater line really jumped out at me–I still prefer to use only use a wire whisk for about 90% of my baking. It is harder physically, but easier mentally and actually takes less time. It’s tempting to litter countertops with beautiful gadgets, but if they don’t actually make our lives easier, they’re just creating more work. On the other hand, my double oven (a Maytag Gemini) makes my life easier every day. It doesn’t take up more space than a regular oven, but allows me to do two jobs at once. Technology and “stuff” aren’t all bad, but we have to be careful about the way we use them so we can make smart decisions with our time and money.

Technology has both simplified and complicated our lives, and that goes far beyond housework. So many possibilities! So many things we could be doing! It’s easy for the “coulds” to mutate into “shoulds”. Cook more gourmet meals-you’ve got machines to help you chop, slice, dice, and steam. Check that email during your child’s school play–isn’t that what smart phones are FOR? Earn more money–the internet has made it possible, right? Stuff the drawers with clothes–your high-capacity washing machine can handle it. Clip more coupons–there’s an app for that, after all. It becomes more difficult not to get caught up in the tide of busy-ness because technology falsely promises to make it all sooo easy.

Though I’m not quite sure Gilbreth’s uber-structured approach would work for me, I found myself nodding over and over while reading her thoughts on homemaking, though it’s been almost eighty-five years since her book The Home-Maker And Her Job was published. (I have got to get my hands on a copy of that book!) Her “less is more” (or perhaps “do fewer things better”?) approach seems surprisingly fresh and relevant even in the face of our modern realities of family life. And while Gilbreth admitted that technology had not been a magic bullet to making life easier for homemakers, she seems to have been a realist: she knew she couldn’t stop the world from changing, only, perhaps, advocate for a saner way of living in it.

I love technology. I love my appliances. But I want to own my gizmos and gadgets, not the other way around. Pressing back against the new “standards” doesn’t have to mean living in a hut with a wood cookstove or eschewing an iPhone; it can be as simple as thinking about your own family’s needs when picking out a washing machine, instead of lusting after a high-end model just because…well, because it’s got eighty-six settings, darnit! Or deciding to turn the phone off for a few hours when your kids get off the bus.

Mostly it means being conscious–of what we’re doing, and why. “Because everyone else does” is usually not a good enough reason. But “because this feels necessary for my home, my life, and my family” almost always is.

How does technology make your life easier…and more complicated? Have you “opted out” of any trends, or created boundaries to make your tech work for you instead of vice-versa?

Tags:Cleaning & Organizing Juggling It All Mindfulness