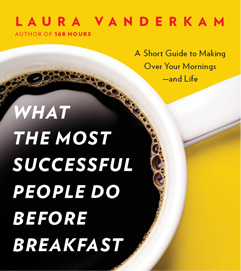 Last month we talked about morning routines and featured author, time-management expert and mom of three Laura Vanderkam’s ebook, What The Most Successful People Do Before Breakfast: A Short Guide to Making Over Your Mornings— and Life. The winner of the giveaway accompanying that post received a morning makeover consultation provided by Laura herself (plus a copy of the book).

Today we’re sharing the story of giveaway winner Carrie Pritchett and her morning makeover, as told by Laura Vanderkam. Enjoy!

We’re all busy these days. We live in a distracted world. That’s why I believe that mornings are the key to getting things done. If you start your day right — taking care of important things first — that feeling of victory can carry you through the whole day. When you make over your morning, you can make over your life.

Around the start of the school year, Meagan put out a call for people who wanted to do just that: make over their mornings and hence improve the rest of their days. Reader Carrie Pickett responded that she was interested. She’s the executive director of the Michigan Supreme Court Historical Society. She’s divorced and shares custody of her two children, a 9-year-old boy and 6-year-old girl. The kids stay with Carrie on Sunday, Monday and Tuesday nights and every other weekend. She’s been making time for a new relationship, but she also wanted time to exercise and blog more regularly (at the lifestyle blog she started, Cosy Carolina).

Carrie thought that mornings were promising for tackling these personal priorities, but she also knew that mornings — at least on the days when the kids were with her — were a bit chaotic. She had to get the kids up and ready for school and then herself to work. She wasn’t sure how to fit exercise and blogging in there — they were sometimes late to school as it was — but then at the end of the day, there never seemed to be time (or energy) for these tasks. What to do?

I had Carrie keep a time log for me. A time log is kind of like a food journal, except instead of tracking what you eat, you track how you spend your time. She recorded her hours in a spreadsheet, and found that “keeping track of my time this way was instructive in itself.” She sent the full 168 hours (a week) over to me.

Carrie did seem to have slow starts to her days. She’d wake up, lie in bed, doze, think about getting up (sometimes she even “dreamed about getting up” as she wrote on her time log), and so forth. Some of that was due to interrupted sleep (her 6-year-old would come visit her sometimes in the middle of the night). But since she did seem to be spending a reasonable amount of time in bed (she’d get to bed most nights by 11 and often closer to 10) sometimes it was just habit.

The good news is that habits can be changed if you want to change them. The key? Having a morning routine that made her excited to get out of bed. Blogging promised to serve that function nicely — giving her an opportunity for creative expression that was separate from work and kids. I asked how long she thought she’d need to devote to her blog to compose a good post. Carrie thought 30 minutes would help a lot. So I suggested setting the alarm for around 6 or 6:30, and working on her blog for half an hour each morning. Then at 7, she could start getting the kids and herself ready. On mornings that the kids were with their father, she could go for a run after blogging. She’d have time to do this because 1) she would be awake instead of hitting snooze and 2) on the days she didn’t have to drive to the kids’ school this opened up a fair amount of time before she usually started work.

She thought this all sounded reasonable, and agreed to give it a try. I called her back in a week to see how it was going. As usual, life had conspired to make establishing a new habit more difficult: she was sidelined with a bad cold, which took running out of the equation. However, she was able to get some blogging done, and she had a new outlook. “I feel much more in control of mornings,” she told me on the phone. “I’m more intentional. Even if I don’t do the plan, I’m making a choice.” She said that things were going “amazingly well,” and that “my kids have not been late to school and yet we also have had happier, more playful mornings. I think it helps enormously that I am getting some of my needs out of the way earlier via blogging.”

As for transitioning into a regular exercise schedule, she was “being flexible.” If a run didn’t work, yoga might. But she liked being able to use this time. “I’m looking forward to keeping up with it.”

What do you do with your mornings? Do you use this time for getting things done?