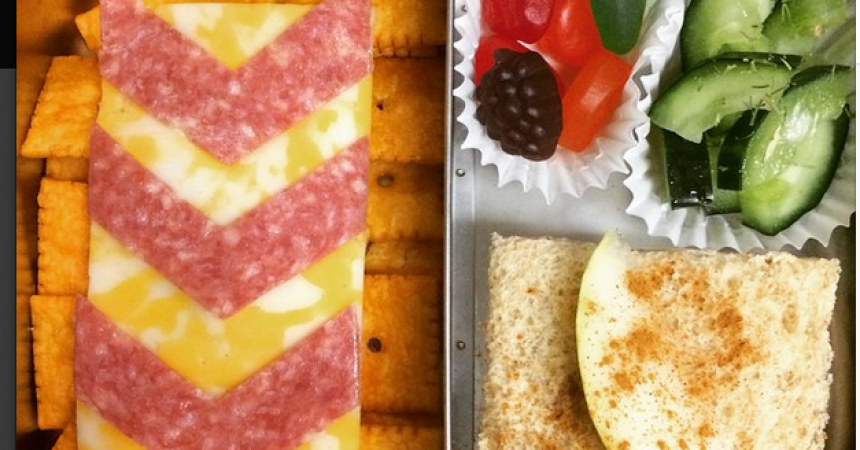 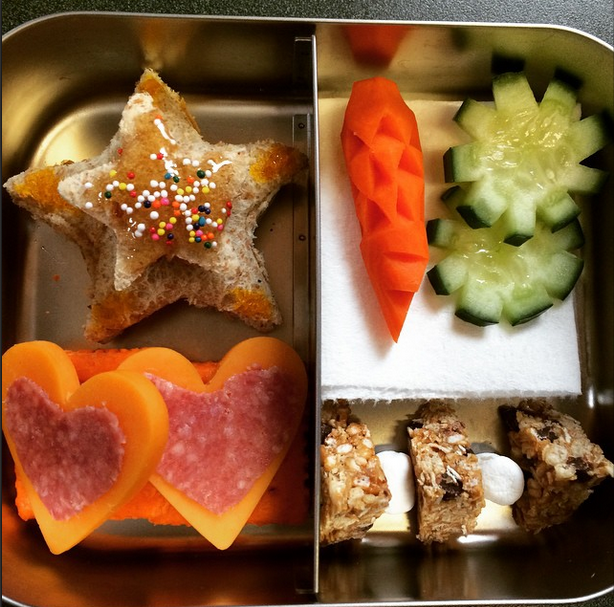 My husband made this lunch for my daughter last week.

I should have known it was coming when I caught him poring over Bento box tutorials on YouTube, watching a woman meticulously arrange smiley faces onto tiny rice-ball heads, then cap them off with pita-pocket hats. The very next day, Jon made a special trip to the grocery store for supplies. And that evening, he and Clara hovered over the kitchen island for a good half-hour creating The Lunch To End All Lunches.

When they finally called me out to witness the end result, my response was half-admiration, half-exasperation. I mean, COME ON. I’ve been making lunches for these kids, all these kids, daily, for years. No, I don’t exactly blow the roof off the joint when it comes to my lunch-making creativity, but every day I deliver something wholesome, edible, and at least reasonably crowd-pleasing. And now I’m gonna get shown up by this…upstart?

Because while I enjoy creative pursuits, I’ve never really felt like my daily lunch-packing session – or even my nightly dinner-making session – leaves a lot of room for playfulness. I’ve got a job here, people: to get the lunches out, to get the dinner on, to get the laundry folded and the toilets scrubbed and the bills paid. For a lot of people, in a limited amount of time. It’s all about efficacy in this house.

It’s the classic Mom Complaint, isn’t it? I have to do all this boring junk, and he just gets to swoop in and be the Fun Parent. The one who decides to cook a meal and turns it into a five-star blowout, far eclipsing all the hundreds of three-star beef-stews and meatloaves I’ve improvised on busy nights, budget-pressed nights, boring-normal nights when he’s working late and I have to somehow make dinner an event anyway (even though I’d much rather just let them eat cereal and microwave myself a burrito after they’re in bed.) The one who can somehow turn a grocery-store trip into a fun adventure rather than a white-knuckled marathon. The one who people stop and praise for taking his kids out in public, no matter how unruly they’re being, rather than shooting him dirty looks. (Moms, I KNOW you all know what I’m talking about here.)

The fact is, when it comes to parenting, I’ve more often taken the “boring” role and he’s wow-ed them with his fun-ness. He takes the boys to the movies and out to use their Pizza Hut Book-It coupons; he was the first one to put bows in Clara’s hair and paint her tiny toddler fingernails; now Dad-daughter “nail salon” time is one of their favorite things to do together.

I’ve heard many, many moms complain that Dad’s the one who gets to do the “fun stuff” while they’re left with the grunt work, the thankless yet necessary jobs that keep the family running but don’t exactly elicit applause. And I get it. Sometimes it’s no fun being the worker bee, the well-oiled-machine-runner, the household manager.

But while I’ve shared those feelings many times, when I’m really honest with myself I have to admit that the version of reality I create in my most martyr-ish moments isn’t quite accurate, either.

Here are a few reasons why:

There’s nothing stopping me from doing fun stuff, too.

Yes, it’s true that around here I’m “She Who Gets Things Done,” but in large part, it’s a role I’ve cast myself in, and one that I frequently cling to with a bit more zeal than is absolutely necessary. After all, there’s nothing stopping me from starting a tickle-fight or cheering the kids on through a game of Super Smash Bros, if I’d just set aside my taskmistress tendencies for a few minutes. My “serious biz” Mom attitude is more habit – and frankly, preference – than it is necessity much of the time. Not that there’s anything wrong with being the grown-up-stuff-getter-done-er, either; I think I just need to be real and honest about how much I willingly choose that role (most, if not all, of the time.)

Some of the “fun stuff” he does really doesn’t sound that fun to me.

I can rarely be bothered to paint my own fingernails; dealing with Clara’s teeny-tiny fingers and all the attention to detail that requires actually doesn’t sound that fun. Ditto with braiding her hair. And taking all the kids to the movies on a regular basis? Meh. I get to the movies all of four or fives times per year; I’d much rather hold out for a grownup flick I really want to see than go take in the newest blockbuster cartoon, though of course there are exceptions (The Lego Movie and Annie being two recent-ish examples.)

I hope I don’t sound Scroogey here. I’m actually a really fun person, promise! It’s just that I’m fun in a way that doesn’t typically involve crafts, projects, or navigating crowded situations with all my kids at once. So while I can inwardly roll my eyes because Jon “has the time” to create a teeny Bento lunch for Clara, the fact is that you could give me all the time in the world, and that’s still not how I’d choose to use it. And that’s fine, too.

“Fun” is relative and depends a lot on your perspective.

For many years I was the primary parent, juggling my paying work with the kids’ needs. And I work from home, which means that my home is literally my work place, in addition to a big part of the work I do. No wonder I take what goes on around here pretty seriously.

Jon, on the other hand, regularly makes a two-hour trek into Chicago to serve his IT clients. Recently, on a “just for fun” trip we took to Chicago, he marveled that, on those days that he drives there for work, he barely notices the city at all: he’s focused on getting in, getting his work done, and getting out without getting gobbled up in rush hour traffic.

Contrast this to the trip I took to Chicago a couple of weeks ago. Sure, I was technically there for work (I had lunch with clients and talked business with a blogger pal of mine) but there was plenty of pleasure involved, too: I took the train in, hung out with friends, and while waiting for my train home, killed time by wandering through stores like Crate & Barrel, a rare treat for someone in a town with limited shopping options.

See the difference? For me, getting into Chicago is an event. For Jon, it’s just another day. It’s basically the direct inverse of how the two of us treat home life: me serious, him relaxed. Neither of us are right or wrong; it’s just that when you do something day in and day out, it loses a bit of its novelty. It can easily become all about getting things done and not at all about having a good time in the process.

Looking at something fun for me – like a long commute to the city – through Jon’s eyes helped me understand why he might not get so jazzed about it, and instead, seek his fun elsewhere. Like in panting those teeny-tiny fingernails – which he seems to find meditative – and creating miniature Bento lunchboxes.

But it also reminded me that I could stand to loosen up a little in my “workaday” life. No, my fun won’t look like Jon’s version of fun, but I also don’t have to be the Head Taskmistress at all times. The household will not fall apart if I decide to play instead of work once in a while, or add a little creative inspiration to a task that currently gets filed under “just get it done, already.”

And maybe adopting that attitude could help me feel a little less grumpy about the fact that, last night, he made this for Clara’s lunch:

Wait! I mean, chevron salami! They had fun. She loved it. Good for him, good for Clara. Right?

So, what kind of fun could I have today?

*Adorable stainless mini-lunch containers from LunchBots, available via MightyNest. Follow me on Instagram for more of Jon’s creations!

It’s not too late to sign up for Live: Creating a Life You Love, an online course that will help you focus on yourself and your family year-round over at Life Your Way. I’m the featured expert for February, and this month we’re talking about showing, giving, and receiving LOVE. You can sign up at any time. Check it out!