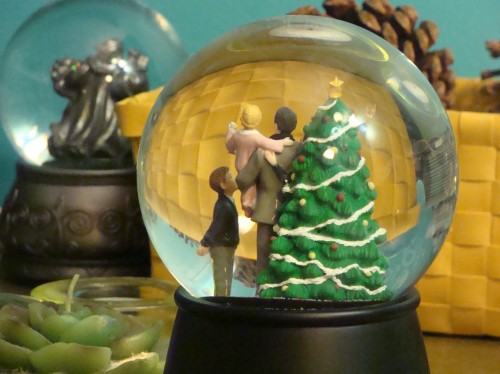 The winter holidays of my childhood were as traditional as winter holidays get. To begin with, there was no winter holiday. There was just Christmas, straight out of the Currier and Ives card box. Blankets of snow and glittering rooftops. Whisky-drenched fruitcakes, punch bowls of rummy eggnog, warm plum puddings with brandied sauce. Plodding through the snowy woods behind my father, saw in hand, to cut down the tree that seemed to want to come home with us the most. Twelve days of making merry, of carol music on the stereo, visitors at the door, and nobody ever, ever wishing anyone Happy Holidays, unless they were singing along with Bing Crosby on the AM radio.

It was a different place, in a different time. I grew up on the island of Newfoundland, in a culture that remains snug with its Old World roots, and a climate that was obligingly, reliably, wintery from November through March. Then I grew up, fell in love with an American, and settled in the suburban mid-South to raise a family.

For a while, I tried to recreate Christmas as I had known and loved it. I wanted my children to experience the same magic. But it was an exhausting stretch of everybody’s imagination. For starters, Americans have a holiday season that begins with Thanksgiving and ends with the New Year, and may or may not include Christmas, depending on who’s doing the celebrating. For another thing, white Christmases are as rare as white elephants where we live. And there was the overlooked fact that my husband had grown up in a different household with his own family and their traditions.

My efforts to chain us to the ghost of Christmas past kept us oddly out of sync with our reality, and not in a way that was always magical. Determined that a real Christmas meant a real tree cut by Daddy’s hand, I’d have us stomping around a sodden tree farm mid-December, long after most of the trees were gone. I’d make giant bowls of trifle, only to have everyone turn up their nose at “soggy cake.” I’d make gifts of precious, aged, rich fruitcake from my grandmother’s recipe, only to be received with forced politeness by my American friends who had never tasted the real thing.

Though my heart was in the right place, I was kind of like the Grinch in reverse, imposing my sleigh-load of trimmings on Whoville, thinking that Christmas resided in the props.

Though I have wonderful holiday memories of those first years, the moments that stand out are those that belonged to the spirit of Christmas present and future. The traditions we were co-creating as a family gradually allowed me to let go of my need to replicate the past. 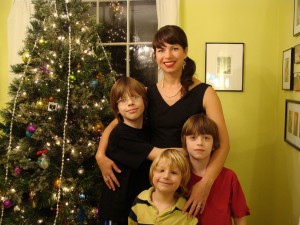 Today, we celebrate the holidays with a nod to both sides of our family tree. The giant bowl of uneaten trifle has been replaced by my husband’s grandmother’s recipe for chocolate butter roll. When I can find it, I buy a little English plum pudding, make brandied sauce, and eat it all myself. Several years ago, I decided it was ridiculous to go on pretending real fir trees are something we would find naturally growing in the Arkansas countryside, and bought a real pretend tree. It goes up a little earlier every year, but I never feel guilty about not putting it away before January 6. Most years we go to Christmas Eve mass, some years we don’t. Last December 24, we went for a long walk at dusk instead, and kept vigil with a herd of deer.

I hope to take my husband and children to Newfoundland for Christmas some day, so they can get a sense of the holiday as I grew up with it. But I suspect it will be much changed, as the world has changed, including that far corner of it. The climate is warming, which is a sad thing for winter wonderlands. It’s a more multi-cultural society now, which is a good thing– more happy holidays for everyone.

It’s true that you can’t really go home again. But it’s okay, because we get to make a new one. 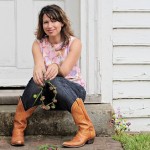 Kyran Pittman is the author of Planting Dandelions: Field Notes from a Semi-Domesticated Life, and a frequent contributor to Good Housekeeping magazine. She blogs at PlantingDandelions.com from the Little Rock home she shares with her husband and three sons.