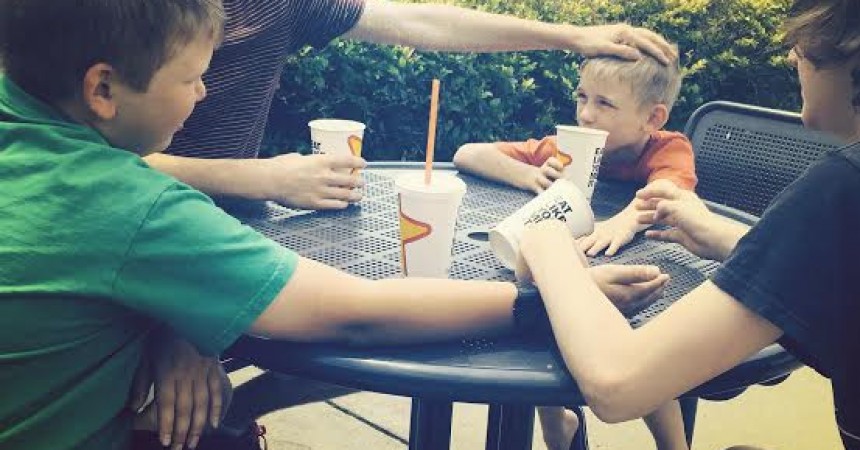 Friday morning, the seven of us piled into the Yukon and began our drive east from Michigan to Buffalo, NY, to visit Jon’s extended family. The trip was slow-going. We stopped on our way out of town for an apparently-essential pre-road trip car wash (is this a dad thing?) then had to make two “emergency” bathroom stops within the first hour of the drive. By the time we really got going, everybody was starving and it was time for lunch, so we pulled into a rest stop on the Ohio toll road to grab a bite.

As we spilled out onto the patio to wait for our pizza, the boys piled onto a four-top table and began doing what they do…which is to say, a lot of joking around, pretend-punching, ribbing, and talking about everything from video games to football to Hogwarts. And laughing, of course. A lot of laughing.

I was busy, of course, dealing with getting Clara’s drink and then getting a new drink when her first one tasted “weird” and making sure we had enough napkins and forks and plates and that everyone had a lid for their cup and all those things parents do when trying to manage the feeding of a large group of children.

But at some point I had a little lull in the frenetic preparations and decided to take a picture. I lucked out and managed to get a shot that truly captured the mood: Sixteen-year-old Jacob with his hand affectionately resting on eight-year-old Owen’s head, while Owen looked up at his big brother; Isaac and William, the middle boys, playing a game with an empty cup. Just brother stuff.

It occurred to me as I looked at the picture what a precious, and possibly – though I hope not – rare, thing it is to have a family full of siblings who are so fond of one another’s company. With an eight-year difference between the oldest boy and the youngest it would be easy for them to have nothing to talk about, but there’s so much common ground between them, youngest and oldest and middle boys.

It’s not just the brothers who enjoy this camaraderie, either. The boys often include Clara in the fun, and I’m sure that will happen more and more as she gets older. And then there are the cousins: over a dozen of them, crammed into our house every year after Christmas, riding bikes around the neighborhood, sleeping on our floor.

Owen and his cousin Quin having a sleepover last summer

I’m not sure why my kids and their cousins all seem to like each other so much. Certainly it’s nothing I’ve consciously done – mostly Jon and my brothers and sister and I have just sat back and let them run amok because we are so outnumbered we don’t have much choice.

But they’ve somehow managed to end up best friends anyway.

Or maybe it’s because we’ve been so distracted with the nuts-and-bolts of caring for large families that the kids have built these bonds. Shared experiences, shared space, and a lot of room to work things out…who knows,  maybe too much relationship management actually gets in the way sometimes.

Probably a lot of it is just sheer dumb luck. Who knows what kind of kids any one family will end up having, and whether they’ll all “click”?

I’m just so glad ours, at least for now, all have.

We spent yesterday at Jon’s uncle’s house, with his mother and brother and sister, his three cousins and their partners, and the combined children: eleven in all. The kids played while Jon’s family reminisced about their get-togethers decades ago, and the trouble the cousins got into together. 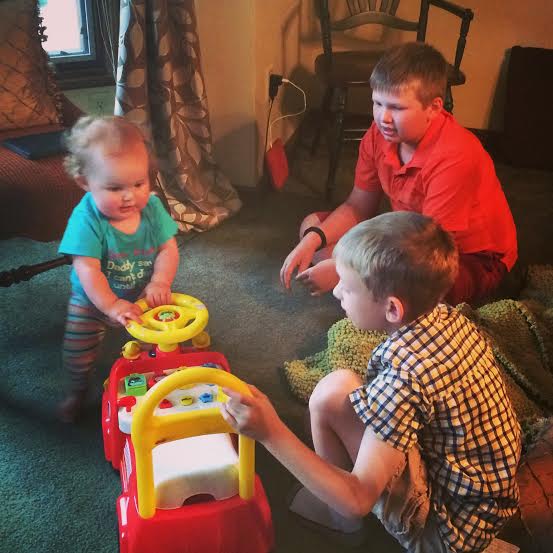 We don’t see Jon’s cousins as much as we’d like, just like we don’t see my cousins, or my brother and his family in Minneapolis, as much as I’d like. But I loved knowing that his three cousins all lived within a few miles of one another, and that the six “original” kids could come together with their spouses and children and reconnect like that last Christmas party when they were all together was just last year, rather than a decade and a half ago. It made me hopeful that this sort of bonding runs in both of our families, and that it’s likely our kids will stay close as they grow up, too.

I know a lot of kind, thoughtful people who don’t have strong bonds with siblings or cousins, and good, conscientious parents whose kids don’t particularly like each other. I know it’s often painful for them. I don’t take any of this for granted, or assume it’ll last forever.

But for now, I’m appreciating it, and encouraging it, and nurturing it in small ways. And hoping it’ll last. Because it’s important to me, this family connection; more important than achievement or athletic prowess or good grades or financial success.

Not that you necessarily have to choose, of course. But when it comes down to it, I’d much rather have a house full of kids who love – and like – one another than a house full of straight-A students or star athletes. And one day, when they’re all grown up, it’ll matter much more to me whether they still make time for each other than it will what car they drive or career they end up pursuing. 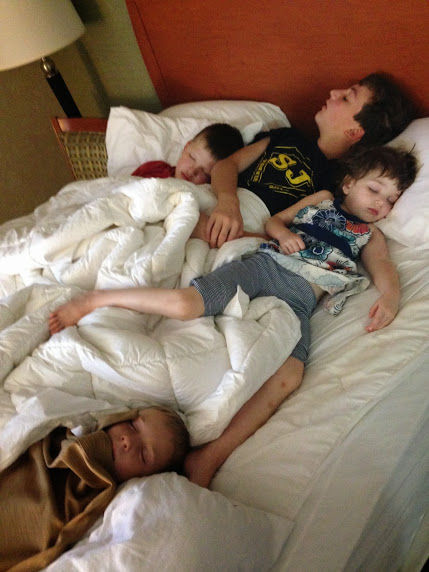 The internet is a wonderful thing, allowing us to stay connected across many miles and easily plan travel to see more far-flung relatives. But it can’t replace hanging around a kitchen island, laughing, as a house full of kids runs around underfoot. Or a bunch of siblings piling into a hotel bed and falling asleep during a family road trip.

We’re a mobile people, we Americans. I understand, and share, our collective wanderlust. And yet one of the things that’s kept us in Michigan, maybe the biggest thing, is this desire to be within a stone’s throw of family.

As our kids grow up and have their own families, certainly the way we celebrate holidays will change. But one way or another, I hope my children have this for themselves: the huge, chaotic get-togethers, kids underfoot, food and drink spilling, laughter.

And spending time, plenty of time, with the people who not only love, but like and “get” them.

Because to me, that’s the point of life.