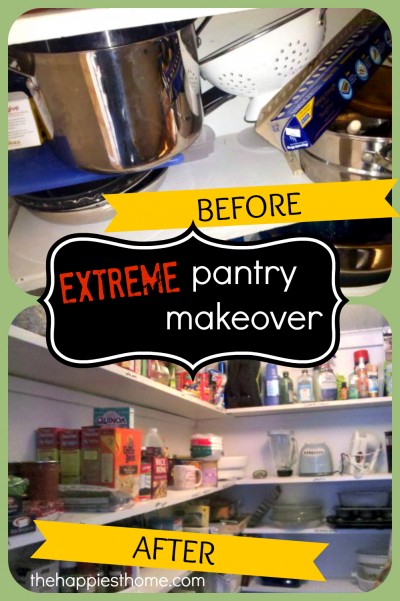 My pantry has been in pretty awful shape since we moved into this house last year. It’s a narrow walk-in pantry (actually an add-on porch at the back of the house) which presents some logistical issues, like small shelves and not much turning-around space. But really, it’s got plenty of room for all our food and then some, so it should have been very functional. Problem is, everything was tossed on the shelves when we moved in…and I never went back in to make sense of it all. Months went by things got worse.

I shoved food willy-nilly wherever it would fit…

Needless to say, creating a grocery list was a challenge.

Jacob and Isaac created teetering towers of pots, pans and colanders every time they unloaded the dishwasher…

I can’t blame them. There was really no obvious place for anything to go. 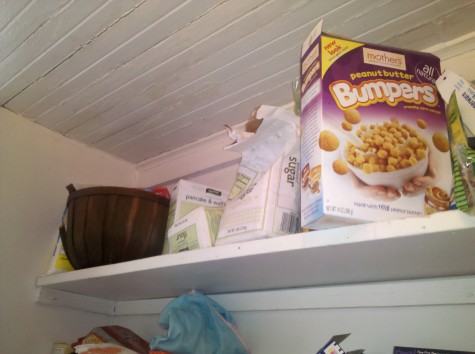 Even the Peanut Butter Bumpers wanted to escape.

Other shelves were completely random collections of things that made no logical sense.

Have you ever noticed that if an area of your house gets neglected, after a while everyone stops trying to keep it neat? A tidy table tends to stay tidy–people respect the neatness and take their stuff elsewhere. But a table piled high with dishes or papers becomes a magnet for everybody else’s dishes, papers and miscellaneous junk. Well, our pantry was like that. Pretty soon people just started throwing random stuff on the floor. 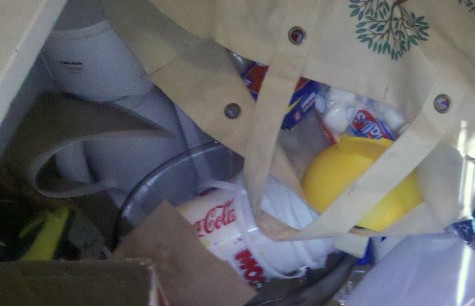 It was completely out of control. But it was so far gone, I was overwhelmed. I just kept thinking I’d get to it ‘later.’

Of course, as tends to happen when you let something get out of control and avoid the work of fixing it, it ended badly. One morning Isaac was getting a box of cereal down from one of those teetering shelves, and the peace was shattered by a loud crash. One of my favorite glass serving trays had fallen (I didn’t even know it was in there!) and broke into a million, bajillion pieces. Glass was everywhere. Luckily Isaac wasn’t hurt, but he easily could have been.

I realized that there was no way I could sweep up the glass without removing everything from the floor of the pantry. And if I was going to do that, I might as well organize the pantry while I was at it.

That process had to start with taking stock of just how bad it had gotten. 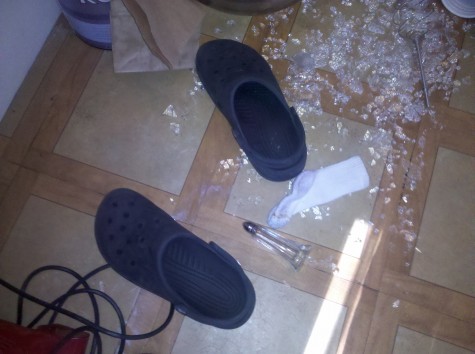 Shoes? A sock? What does that cord go to? And hey, there’s the other salt shaker. On the floor! Of course!

As you may recall, I recently wrote a book with Regina Leeds, the “Zen Organizer” and creator of the “One Year To An Organized…” series. Our book One Year To An Organized Life With Baby (to be published in February) covers all aspect of getting your life in order while pregnant to prepare for your baby, and how to stay on top of things (as well as you can) after the baby arrives. And while I’ve got tons of expertise when it comes to stocking diaper bags and making birth plans, the kitchen organization part was ALL Regina’s domain.

Getting my kitchen in order has never come naturally to me, but Regina’s plan made it seem easy…so I decided to follow her process to get my pantry under control.

First, I took everything out of the pantry. At first I arranged it neatly on the counters by category… 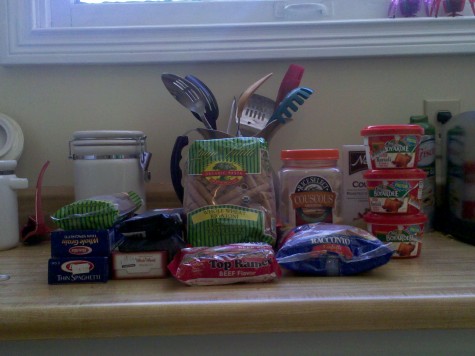 …but pretty soon my two small countertops were completely covered and overflowing with food and dishes. 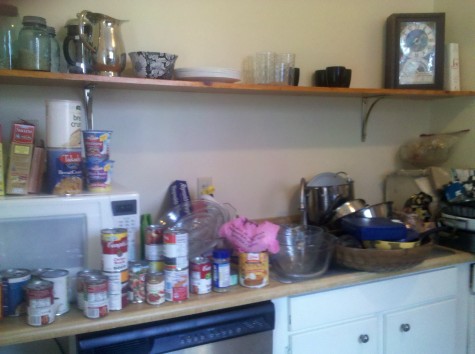 Regina’s process includes a speed elimination of expired food, but since we moved in not too long ago, I didn’t have much of that. But I did realize I had way too many dishes and utensils. I’m great about eliminating clutter in every room but the kitchen: it’s like I’m afraid to get rid of any gadget or tool, because I might need it for some cooking skill I have yet to acquire.

Of course, that attitude has led to me carrying around things like banged-up, cheap old pots and dollar-store utensils I got when we first married. When I took a good look at my pantry, I saw that well over half of the clutter wasn’t food, but stuff. And most of it? I just didn’t need. (How many saucepans can a person use at once, anyway? )  So I decided to only keep the nicest and most necessary items. Everything else would have to go.

I washed down the empty shelves, then started arranging the food by category, per Regina’s guidance. One part of her advice I found particularly helpful was to put food groupings you use a lot in a place that’s easy to get to. I use beans, grains, and pasta the most, so they went on the middle shelf closest to the door. On the other hand, I use cake mixes only a handful of times a year, so they went up high. And the snack shelf went up high too, to keep little fingers out (technically they’re supposed to be just-for-school snacks, though I sometimes bend that rule.)

Sometimes categorizing was tricky because of overlap. For example, should a can of refried beans go with the ‘canned’ food, or the taco shells since that’s what I’ll usually eat it with? Is a jar of spaghetti sauce a “sauce” or does it make more sense to put it with the pasta? I finally decided to just put things together in a way that made sense, and leave a little extra space in each category in case I wanted to change it up later. The categories I used were:

I also had to decide what wasn’t going to go in the pantry. For example, I decided to put cereal on top the fridge because it makes the morning shuffle easier and saves pantry space. And I am a believer that frying pans and saucepans don’t mix (they just create avalanches) so I put the frying pans in a cupboard in the kitchen. On the other hand, while Regina had wisely recommended not putting cleaning supplies next to food, the highest shelf in the pantry is really the safest and most logical place for us to store those items. Luckily most of the sprays and solutions we use are not particularly toxic. I did put the toilet cleaner in a locked cabinet in the upstairs bathroom, though.

The next step was labeling the shelves. I didn’t happen to have any labels on hand, so I just used Scotch tape and a Sharpie in the meanwhile. (Don’t wait until you’ve got every single necessary supply to start on a project or you’ll never start. Just work with what you’ve got, and fill in any gaps later.) 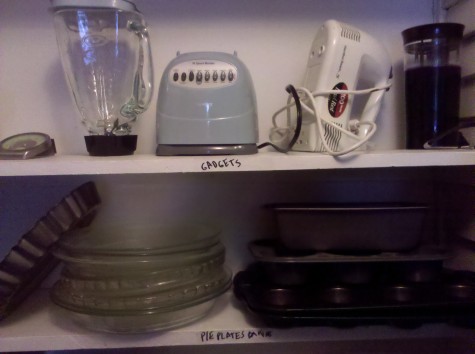 And after just a few hours of work, the pantry looked like this.

I made some finishing touches on it over the following week, like tweaking a category here and there and buying printer labels so it would look a little nicer… 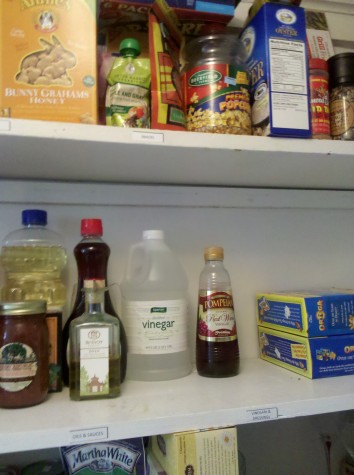 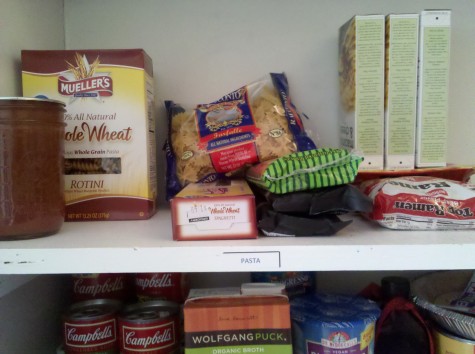 The final, final step was training my kids on what each category means and what items are supposed to go where. It may take some further guidance, but so far they seem to be respecting the system. The labels definitely help (can’t believe I waited this long to use labels!), as do the logical groupings.

Am I happier now that my pantry is organized? Actually, yes. It’s easier to put together a healthy meal when I can see at a glance exactly what I’ve got and get to it with ease. Meal planning is easier and so is buying and putting away groceries. Even unloading the dishwasher is kind of a treat now that there’s a tidy, neat place to put everything. And just walking into the pantry makes me feel calm and nourished rather than stressed out and chaotic.

Lesson learned: if there’s an area of your house that’s bringing you down, but seems too overwhelming to tackle, do it now. Don’t wait until the perfect moment; don’t wait until you can go to the organizing section at the store and buy everything you might possibly need. Break the process down into steps (Regina’s books can help) and dive in. That disaster-area closet or chaotic cupboard doesn’t have to be perfect to be a whole lot better, and whatever hours you put into the project, you’ll gain back tenfold in all the moments you won’t waste digging through piles of mess. Plus, wouldn’t you rather spend time in a space like this? 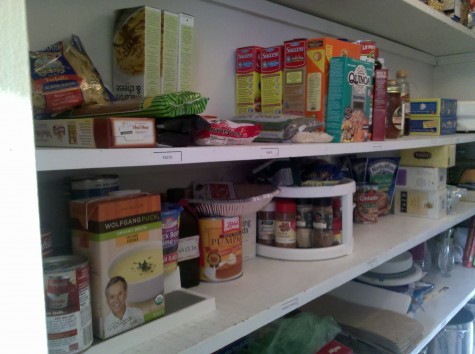 Has my pantry project inspired you to organize an area of your house? Tell me all about it. If you finish a project during the month of October and blog about it, I’ll link to your project from The Happiest Mom.