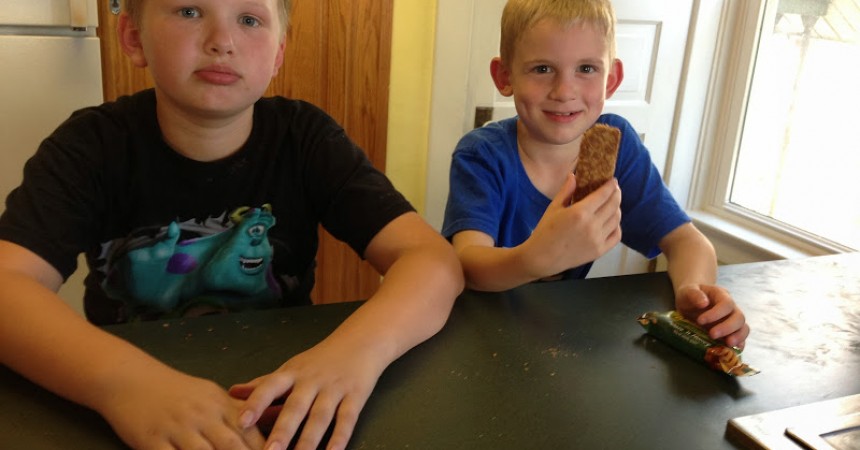 This post is part of our Summer Shortcuts series. Sarah and I are taking turns all summer long sharing little “cheats” and ways we give ourselves a break during the summer months. Enjoy! -Meagan 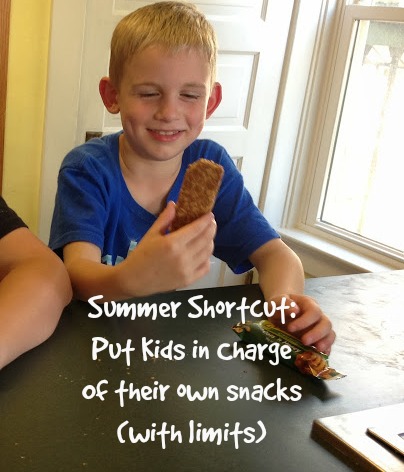 I’ve often marveled how, during the school year, my kids are readily able to survive the 8 hours between breakfast and the final school bell with just one lunch and a small snack…but during the summer, they somehow manage to become human trash compactors, thinking about food every fifteen minutes all day long.

I used to just accept that I’d be dealing with snack requests all day, day in and day out, for the duration of the summer; until one day I was working under a deadline and realized that, one hour in, I had not had an uninterrupted stretch of work lasting longer than five minutes. The toll of all those requests became clear: my kids had been slowly wearing me down in a quest for granola bars and cheese crackers.

I realized that what my kids needed was more autonomy over their snacking. For some reason my boys had always been very deferential when it comes to food, asking permission before they so much as opened the fridge. I appreciated that because it felt so very polite, but when I realized I was regularly fielding questions like, “Is it OK if I have a glass of water?” I knew I needed to help them feel freer to, well, help themselves.

At the same time, I needed to set clearer limits and rules about food so that the kids would know – without asking me 14 times in a typical morning – what’s OK to eat as a casual snack and what’s more of a treat.

I won’t lie – even with more freedom and clearer boundaries, I still field plenty of food-related requests. But it’s so much better now than it was a few years ago. 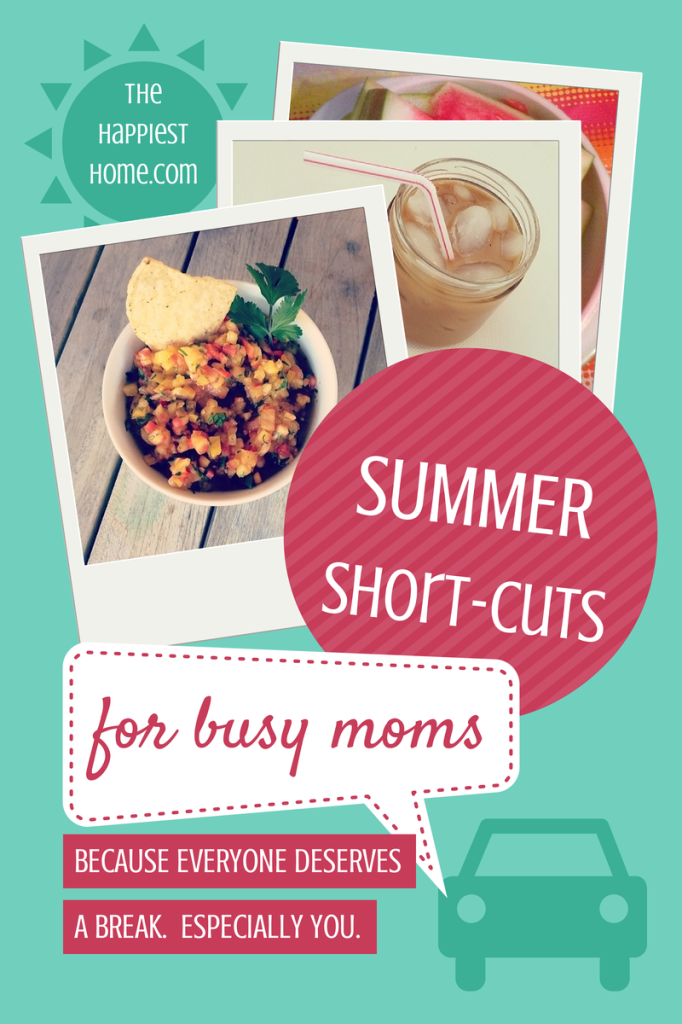 Here are some of the changes I made and how they made my summer life less centered around my kids’ snacks:

First, I took care of the constant “can I have a drink?” dilemma. At the time we had a fridge that didn’t have a water dispenser, and two of the kids were too short to help themselves from the sink. So we purchased one of those rectangular five-gallon water jugs where the spigot is close to the bottom, and set it on a low shelf in the fridge. Even our preschoolers were able to help themselves to a cup of water at any time. (When we needed the fridge space, we moved the jug to the counter and never heard any complaints about drinking room-temperature water.)

Now my kids are all tall enough to use the water dispenser, but I still have to make sure there are cups sitting out on the counter or clean in the dishwasher for the younger two to reach.

Then, I made some distinctions between different kinds of snacks and communicated those to the children:

Speaking of drinks, I realized right away that I had to make some choices about other non-water beverages. We don’t drink much juice, and I would rather not have to police its consumption, so if I make or buy juice or lemonade, I just sort of accept that it’ll be a free-for-all and gone quickly. On the other hand, juice boxes (usually left over from a party since we rarely buy them) are more of an “ask first” item, especially if there are more kids wanting juice than boxes to go around. How you handle juice, milk, etc is up to you, but just make a decision upfront so that you can make your life easier later on.

If you have a predictable summertime schedule, you may also want to train your kids to only snack at certain times of the day. Our routine is pretty free-form during the summer, so I don’t mind if lunch looks more like a series of healthy snacks, or if they eat breakfast at 9 one day and 8 the next. If you want or need more structure surrounding food, though, this is the time to set up preferred meal times or “don’t bother asking for a snack” times.

A final note: one key that this whole system hinges on is making the foods you want the kids to eat super-accessible…and then making sure your children have the skills to open or prepare their snacks once they’ve gotten the go-ahead. It took me a while to teach my kids how to pour milk into cereal, spread peanut butter on bread, or open a jelly jar, and Clara still can’t do much of it (though thankfully she now has plenty of big brothers who can do it for her!) But I keep slowly training because my goal is to eventually have all my kids able to “help themselves” in the kitchen.

Depending on your children’s ages, you may need to make kid-sized portions of different snacks readily available on a low shelf or counter. When I had a house full of smaller children, I had a snack basket filled with pre-portioned bags of crackers, dry cereal, etc, so they could just grab themselves a snack. You can also dedicate a low shelf of the refrigerator or a lower cupboard to kid-friendly snacks.

Like any other system, this one takes time, repetition and consistency to make a habit. But stick with it, and pretty soon those endless snack requests will become much less frequent. The bonus: your children will become more independent, take ownership of the foods they eat, and develop important life skills to boot. Because one day? Knowing how to open a granola-bar package is really going to come in handy for them.

How do you manage summertime snack requests? Any tips or tricks to share?