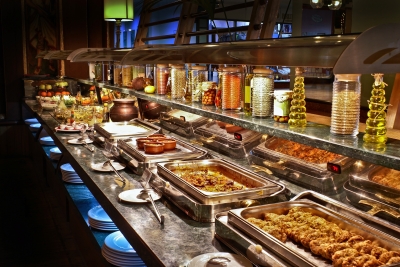 I’ve been to quite a few blogging and writing conferences, and generally come away brimming with ideas, spilling over with excitement, and generally more wired than a puppy on speed. But after leaving Blissdom last week, I was much quieter than usual. More introspective. More focused.

I think the stage was set when I initially opened the conference brochure.

“What? There’s only like six panel offerings in here,” I said, turning the brochure over in dismay to see if I was missing a page. Nope. At most conferences the panel schedules look like a college course catalog. This one was more like the very limited menu at a fine-dining establishment.

It threw me. I think of myself as somebody who likes to have a lot of options, even though I generally end up feeling overwhelmed by them in the end. Or disappointed. I’m thinking of the last time I went to one of those all-you-can-eat buffet chain restaurants and was dazzled by the spectacle of food options in front of me. Fifteen minutes and one upset stomach later, I realized it was pointless to have so many food options in the buffet when none of them were worth eating.

And somewhere, between listening to Brene Brown speak so articulately and intelligently, drawing from her years of research on a single topic during the opening keynote, and hearing Scott Stratten talk at the closing about how there’s no point using social media to promote stuff that’s, if I recall correctly, “not awesome”,  a small, quiet voice inside my head began chanting a little motto. It took a while before I could hear myself clearly (700 women in one place do create a lot of background noise) but finally, after the plane had landed and I’d returned home and had some time to reflect, it came to me.

I usually come home from conferences with page after page of scribbled to-do lists, ideas for new blogs, new books, new partnerships, new programs. Generally my fervor extends into other areas of my life and I also start keeping other lists of ways I want to improve my personal life, my home, my parenting. Lists of ideas of things I could do and try and be. Social media just amplifies this butterfly side of my brain. There is always, always something new I could or “should” be trying or looking at or talking about. Always.

But this time I came away much quieter, my only lists–and short ones, this time–inside my head. The fever to “do it all” was somewhat quelled.

I realized that I already know the things I need to do, which is different from all the things I could be doing. And here’s the trick: it’s more important to actually do those things that need to be done than to pursue the shiny new idea right around the corner.

It’s become my personal motto for the year. And the really great thing is that it extends to every area of my life: Work. Home. Personal life. Family.

Instead of coming up with eighteen new blog ideas each year, trying to master every new social media platform, or feverishly pitching ideas to editors, I can focus on making this blog the best it can be, a resource that will really help people, that moms will want to spread the word about, that publishers will respect, and yes–that will grow my career. And I can trust that if I do a, b, c, and d above well, “e” will follow.

Instead of making long lists of things I need to do to improve my house: tear down the wall between the kitchen and dining room/get all new appliances/paint the living room/rip up the carpets/refinish the floors/swap out the countertops, I can try harder to keep the home I already have clean and tidy, make it feel warm and snug, and hang those darn pictures in my living room already.

Instead of collecting catalogs from every health club and YMCA in the county and then planning out a schedule that would have me taking Zumba on Monday, Pilates on Tuesday, spinning on Thursday, etc, I can actually…show up for the yoga class that’s 4 blocks from my house. Regularly. And work hard while I’m there.

Instead of making elaborate plans to take the kids to story hour at the library every week (even though I hate it), working into the evening so we can afford a ski vacation, and dreaming about when the weather gets nice enough that I can take them to the nature center, I could read them a book. Go play in the snow with them. Go for a walk around our yard. Help them with their homework.

The truth is, every day brings with it plenty of opportunities for us to do better–not perfect, but better–at small, familiar things instead of chasing down the next new thing that will “make” us more: fulfilled, successful, better parents, more in shape. The more I try to do everything, the more elaborate a schedule I cook up–the more I slack off, drop the ball, leave things hanging. Because I can’t do everything and do it well. So-

When I talk about things like time management, or productivity, or having a plan, or getting things done, the point is not to “get more stuff done in less time.” It’s to focus on what matters, and let the rest go. Do the things that need to be done–and do them well enough that I don’t have to go back and re-do them later. Do the things I want to do–and do them well enough that I can usually be proud of my efforts, that opportunities arise naturally out of them instead of being forced, and most importantly, that I’m filling my precious hours with things I want to do well, rather than filler.

Really, could there be any better, more satisfying, or happier way to manage my time, my work, and my life?

PS: I’ve written a follow-up to this post: “How to do fewer things better? Step One: This is enough.”

What do you think? Do you identify with trying to do too many things at once, always biting off more than you can chew up well? Or are you on the other end of the spectrum–a perfectionist who’s afraid to try anything new for fear of not doing it right? I would love to hear from moms on both sides of the spectrum.

Are you visiting my blog for the first time? So glad to have  you here! Take a minute to check out my About page, read some of my favorite posts, and if you like, subscribe via email or RSS feed. And be sure to check out the great giveaway that’s going on right now.