Imagine this: it’s a Sunday afternoon. One child just got done shoveling the walk, and another is unloading the dishwasher. You, on the other hand, are reading a magazine, sipping a cup of tea and enjoying the calm of a neat (enough) kitchen…that you didn’t even have to tidy up yourself.

Sound like a fantasy? It’s not! It’s actually how my Sunday afternoon played out…and it’s a pretty common scenario around here.

It hasn’t always been this way. Earlier in marriage and motherhood, I was surrounded by mess and chaos, and bogged down by resentment. Why didn’t other family members recognize what needed to be done…and just do it, without having to be asked? How could my husband and kids just sit there watching TV while the house was falling apart around them?

I’ve never been a naturally neat person, but being surrounded by chaos and mess makes me feel depressed and anxious and makes it harder for me to work or enjoy family time. In those days I was doing almost all the housework, but not very well, and with a decidedly bad attitude.

Finally, I realized that it didn’t matter whether it was fair that nobody else seemed to put household tasks at a high priority. And my indignation certainly wasn’t making me any happier.

I came to accept that, if I wanted things to change, I was going to have to take charge.

When I did, I found that the kids I’d thought were lazy simply needed direction. I learned that Jon is perfectly willing to pitch in, but doesn’t always realize what has to be done. And I learned that keeping a house reasonably neat (not white-glove perfect) isn’t nearly as hard as I’d convinced myself.

By far the biggest game-changer in our household’s transformation from chaos to clean-enough was learning to use my workforce: my kids!

Delegating wisely and actively makes our home cleaner and helps me feel more in control…even though I do less actual housecleaning than ever before.

In a way, a busy household is like an organization or business. Everybody might have his or her own job, but somebody needs to be in charge: managing, overseeing, and holding other “team members” accountable. Nowhere does this become clearer than in a large family, but I think even smaller families can benefit from an active approach to home management.

You don’t need complicated systems, an iPhone app, or thousands of dollars worth of organizing products to have a functional, clean-enough house. All you need is an adult who’s willing to take over the management role, kids who respect your wishes enough to do what they’re asked, reasonable standards and a little patience. Here’s how it works in our house.

Fans of the period British BBC series about an aristocratic family in the early 20th century – and the large team of servants who keep the household running – might be as fascinated as I am by the order and efficiency of the “help,” from the lowly kitchen maid on up to Carson, the butler and official head honcho.

My vision of a well-run household looks something like a miniature Downton Abbey, without the fine table manners and silver place settings. Each “servant” knows exactly what is expected of him or her, and exactly which standards he or she will need to live up to.

Of course, our home is our home, not a place of work. And my children aren’t servants, though I do think they would look cute in those period uniforms! But there are three tips I’ve gleaned from the Downton Abbey approach to home management that I think work particularly well in a family environment: 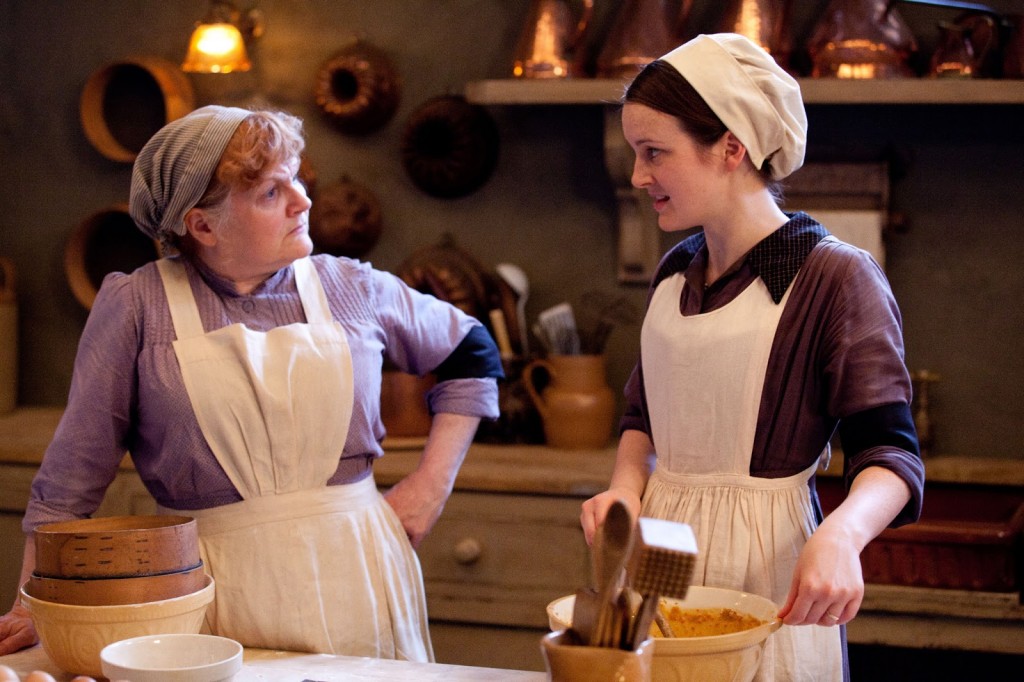 The more you do something, the better you get at it. Of course, I want every member of my family to have at least a passing knowledge of how to wash a dish or rake a lawn. I’m not suggesting that it’s a good idea to turn each child into a small factory worker, stamping out only her piece of the puzzle again and again. And there are times when everyone in the house just needs to pitch in where they can instead of worrying about whose “specialty” the job is.

But it just makes sense to hand off jobs to the people that are best able to carry them out well without a lot of supervision. For example, while Jacob almost always handles the trash, the recycling is Isaac’s realm. Owen tidies up the living room every day, while William runs the vacuum. And Clara knows that as soon as everyone’s home from school, it’s her job to tidy up the entry room and line up shoes and backpacks by the back door. Since everyone knows how to do their specific jobs, they do them without need for much direction, which makes my life a lot easier.

I also find that when my kids are expected to do certain things regularly, they are more likely to take ownership of those jobs. And when they take ownership of a task or area of the house, they care whether it gets done right. There’s less policing needed on my part, and when a younger child needs to learn how to do the job, the older sibling seems to relish showing him the “right” way to do it.

While we occasionally offer the kids payment for jobs that go above and beyond the usual workload, for the most part we don’t tie housework to allowance or other rewards. I don’t think there’s anything wrong with chore charts, task-based allowance or the like, but in our family, housework is something you do because you’re part of the team, and it’s our job to help each other out.

I find that this approach allows me to manage the house with more flexibility, because I can quickly sum up what needs to be done and assign tasks to the right helper. Often that’s the child who “specializes” in said chore, but sometimes, it’s whichever kid looks the most bored or happens to be standing closest to me.

For example, earlier today I turned to Isaac and said “will you unload the dishwasher?”

Doesn’t get much simpler than that!

Stick To Your Realm:

On Downton Abbey, Mrs. Patmore stays in the kitchen while a lady’s maid attends to personal matters in the bedroom. Mrs. Hughes manages the female staff, while Carson the butler keeps his eagle eye trained on the valets and footmen.

It’s not really possible to divide up a house quite so neatly among family members, (possibly unless you happen to have ten or twelve children) but I find that our household functions best when we adults remain in charge of the realms that matter most to us.

For example, I’ve taken responsibility for the kitchen realm, which means I’m the one who decides which child is going to take on which jobs that day. And if I want Jon, my husband, to do the dishes one night, I need to ask him, because it’s not something he would normally do…just like, if he wants me to take the car in to get the brakes checked, he had better give me notice and at least two reminders.

Knowing which realms each of us controls helps us avoid doubling up on one another’s work or letting important things slip.

I used to get really frustrated with Jon for not being more proactive when it came to cleaning the bathrooms or planning meals. But then I realized that he spent a lot of time thinking about the things he tends to handle, like car maintenance and serving as our family’s in-house tech support person. Since those things just aren’t things I tend to notice, I didn’t give them due justice. But that doesn’t mean they aren’t important, too.

So if you’re feeling like your partner isn’t carrying his weight, make sure you’re being fair about what he is doing. It’s possible you just aren’t noticing how much is getting done right under your nose. In a busy modern household, even simple things like managing battery supplies and replacing burned-out lightbulbs can be a lot of work!

You’ve probably noticed from these examples that in my marriage, our relative “realms” tend to fall along traditional gender lines. This isn’t something we did consciously, but – probably owing to both growing up in rather traditional families – it’s the pattern that we have fallen into.

We are both fine with it. As it happens, I am most content caring for home and hearth and feel truly called to make our house a comfortable place. Jon is much more technical-minded, and paying attention to computers, gadgets, and automobiles fits both his personality and his interests.

You may find that you each naturally gravitate toward traditional household roles, or it could turn out that your partner would love to take ownership of the kitchen while you seize responsibility for yard care. Either way, who does the dishes vs. who changes the batteries in the smoke detectors doesn’t necessarily say a thing about the equality of your relationship, or overall gender politics.

I may be more Mrs. Hughes than Carson, but when it comes down to it, we are both equally in charge and our requests equally respected by the kids, and that’s what counts.