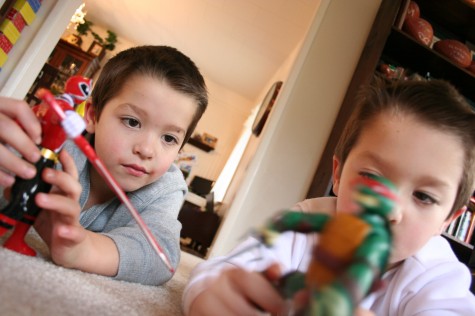 When I asked him why his request was so specific, he said because “Power Rangers eat homemade soup with real carrots, so if I eat the same things they do I’ll finally become a real Power Ranger and not just a boy wanting to be a Power Ranger.”

He stressed the words finally and just as if being a Power Ranger was something he had been dreaming of for a long, long time. Chances are, he probably has.

Like most, I get caught up in the minutia of motherhood – the errands, the cleaning, the early mornings and late nights – and I all-too-quickly dismiss the magic of childhood.

Lucky for me and anyone else who can identify, there is a book that can help refocus our attention someplace more meaningful, to that of our children and their infinite imaginations. 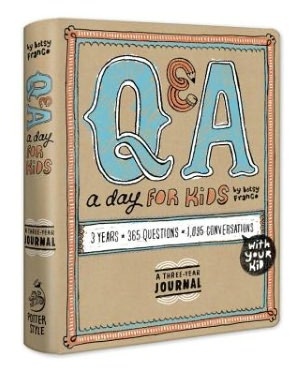 Q&A a Day for Kids is a journal of questions that act as conversational prompts of sorts. The book contains three years’ worth of daily questions for parents to ask their children with space provided to record the child’s answer. Each year overlaps with the corresponding day of the past years to allow for reflection and to see the changes in answers as the child has aged.

But to me, the magic is found in the answers and the conversations derived from them. For example, I know my boys are on a deep obsessive streak with the Power Rangers and Ninja Turtles, but I had no idea that they truly believed that if they could transform into one they would actually – literally – be able to “stop bad things from happening to good people.”

I learned that on November 9, after I posed that day’s conversation starter: “Today was awesome because _______.” Jack’s initial answer was that he had a great day because “he played Power Rangers and blocks.” His brother echoed his statement, adding that Disney Junior was on TV as well. But as is usually the case when you’re talking with and not just to a child, one question leads to another and another and eventually you’re learning that the Power Ranger’s simple act of introducing a force of good into a situation, the bad is automatically erased.

“It’s not just because they fight the Moogers, Mom,” Brock said about the Power Rangers’ awesomeness. “It’s because they show up and help the other people around them feel brave.”

Answers like that help to remind us that the simplicities of childhood thinking are sometimes enough: They outweigh every errand on my list, every shirt that needs to be folded and make all the early mornings worthwhile.

Although relatively simple, this book has the potential to change not just an afternoon, but our outlook as parents. And the best part is that it can easily become part of a daily routine. For three years – or more if you choose to buy another copy and continue the process – you can read, ask, talk and connect with your child.

This is more than a book or a journal; this is a keepsake.

And as the Christmas shopping season continues, this is one book you might want to keep in mind. It’s a gift for the entire family.