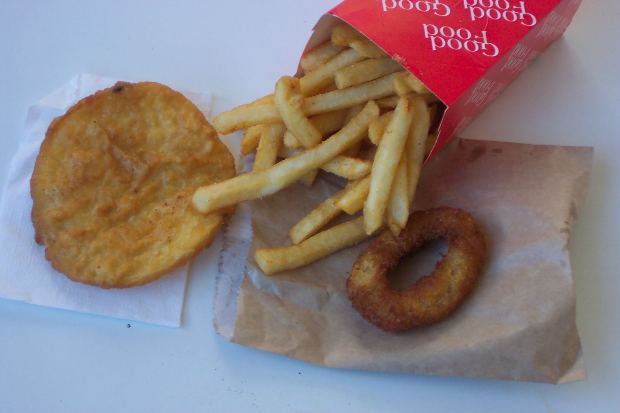 In the spirit of the new year, this month I’ll be sharing a few successes I’ve had in beating bad habits or introducing new, healthy practices into my daily life – and how I did it. I hope my “how I did it” stories inspire you to try making your own changes in 2014 – or to share your own success stories in the comments!

I have never eaten more French fries, during any point of my life, than I did in my early years of motherhood.

Looking back, I can see how it happened. I was staying home with a toddler and an infant, and we lived in a suburban area where I didn’t know many people. Mornings were for breakfast and housework and naps, but when afternoon came, stretching so long and lonely in front of me, I’d start to get twitchy.

Daily I’d strap the kids in the car and we’d go for a drive, our “Best of Sesame Street” cassette on repeat (my car was a 1995 model and I didn’t own any other cassettes!). Sometimes we’d go to the zoo, sometimes the mall, sometimes the park…anything to kill time and get out of the house.

But almost always, our trip either began with a swing through a drive-thru, or ended with one on the way back.

I was a connoisseur of fast food in those days. I knew the options on every single menu board. I knew exactly, to the penny, what certain meal combinations would cost, and I knew, always, which toys were on the kid’s meals. (It always drove me crazy that Wendy’s had the best food but the worst kid’s meal toys, while Burger King’s food left me cold, but they had the best trinkets!)

At some point, though, my love affair with fast food started to wane. Maybe it was when, during my fourth pregnancy, I started experiencing gall bladder spasms every time I’d eat a serving of fries. Maybe it was when I realized that my metabolism would no longer allow me to maintain my weight on a steady diet of value meals. Or maybe it was when my boys started graduating out of the kids’ meal stage, and I experienced the serious sticker shock of trying to feed seven people on “grown-up” fast food. (A trip to the Golden Arches can easily set us back $40 or more these days.)

It took a while to cut down – the lure of easy, salty/greasy/fatty food, fast, can be hard to overcome! – but gradually we went from eating fast food 4-5 times a week to about once a week. I was okay with that frequency and could have continued right there, but something strange happened while I wasn’t looking: we almost completely stopped eating fast food, without my even consciously deciding not to.

Now, unless we are on a road trip, I can easily go weeks without even thinking about a junior cheeseburger with ketchup, mayo and mustard with crispy fries on the side. In fact, even typing that, just now, didn’t send me into a tailspin of desire. That’s what I call progress! 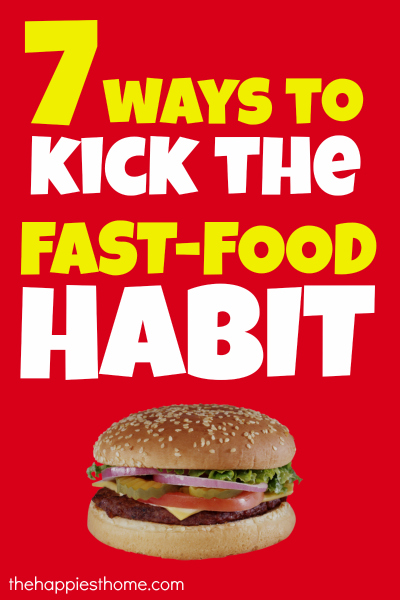 If you’re in a position where you know you’re eating too much fast food but can’t figure out how to cut back, I totally understand. I’ve been there. But now that I’m on the other side, I can see some lifestyle and mental changes I made that helped get us over our reliance on the drive-thru:

1. I realized the true cost.

When it was just me and a toddler or two hitting the drive-thru, it was easy to delude myself into believing that fast food was a cheap alternative to dinner at home. But as those kids have grown into big, double-bacon-cheeseburger gulping boys, my fast-food budget quickly skyrocketed. Now, it costs upwards of $35 to grab us all dinner at a drive-thru. Considering I can feed my family, say, a pot roast, veggies and potatoes for around $15, it’s become clear that fast food is not the economical choice I thought it was.

2. I created a backup plan.

I used to tell myself that fast food was the logical option for busy nights when I didn’t have time to cook a big meal. But at some point, I realized that almost anything is better than a greasy dinner in a sack.

Canned soup. Grilled cheese sandwiches. Eggs and bacon. Sandwiches and salad. A box of pasta with a jarred sauce. Frozen microwaveable burritos. Ramen noodles. All are less expensive than fast food, many are more healthy, and most take less time to make than it would to get in my car and drive to a restaurant.

Making sure to have quick backup meals has all but eliminated the “I don’t have time to cook” drive-through excuse. And we’re still eating something together as a family, even if it’s not always a from-scratch meal.

3. I stay out of the car at trigger times.

I used to run through the drive-thru at all kinds of odd times of day, usually because I’d find myself out running an an errand and be suddenly starving. That hour when it’s not-quite lunchtime or not-quite dinnertime is when I tend to get big-time cravings. I try not to be out driving around during those times now, or if I am, I remind myself that soon I’ll be home and can make a real meal.

4. I established the family meal as the cornerstone of our evening.

This was probably the single biggest factor in our fast-food fight. By creating a pleasurable routine around preparing dinner (my “kitchen hour“) I set an expectation for myself and the rest of my family that, the vast majority of nights, we’ll be eating in. I also created a habit of starting dinner in the late afternoon/early evening, instead of running around taking care of other things and then finding myself without any dinner started at 6 PM, like I used to.

5. I simplified our lives.

By far the biggest reason to grab food “on the go” is being, well, “on the go.” So we just aren’t much. I find that if we have to take the kids to evening activities once or twice a week, I can still manage the weekly routine of shopping, prepping, cooking and cleanup. But if it starts edging into three or four or five nights a week, I start slipping behind and those fries and burgers start sounding nice and easy.

My solution to having the kind of home life I want for my family – one that includes good food, a peaceful atmosphere and lots of downtime – is to keep our evenings simple. Of course, now and then life gets temporarily more busy, and during those times we deal with it as best we can (which may include more fast food.) But I always try to keep the ideal in my head so I know what to work back toward when life calms down.

There seems to be a correlation between the fact that Clara doesn’t like fast food – not even chicken nuggets! – and the fact that we rarely go to the drive-thru these days. After all, if I have to come home and make her something else, what’s the point?

Of course, you can’t plan for a fast-food-hating kid, but maybe the lesson you can learn from my mistakes is to make sure your kids don’t develop a fast-food dependence in the first place. I don’t think it’s a bad thing for a toddler to like French fries (who can blame them?) but when they see a pit stop for a chocolate milk and chicken nuggets as a cornerstone of their daily experience, it becomes a lot harder to deny them when you decide to give it up.

That’s not to say you’re doomed if your kids have already developed a taste for fast food, though. It took months of my driving past the fast-food strip in our town to a chorus of “Moooom, why not?” before my boys finally gave up and stopped asking. The good news? They did stop asking. (Mostly.) Now it’s just no longer something they expect daily, but look forward to when we go on long drives.

7. I admitted there was a disconnect.

More than anything else, my move away from regularly eating fast food happened when I realized that there was a big gap between what I believed about food and health and family time, and what I was living week to week. I gradually realized that, when it came to our eating habits, I’d been telling myself a lie. I kept telling myself we only ate fast food “every now and then,” but truthfully, it was at least several times a week. It just wasn’t a sustainable, healthy way to live. Now, when we do go to Taco Bell or Wendy’s, I feel OK about it knowing that it truly is a once-in-a-while treat, not a regular, expected part of my family’s diet.

Have you reduced – or eliminated – fast food from your family’s diet? We’d love to hear what worked for you in the comments!