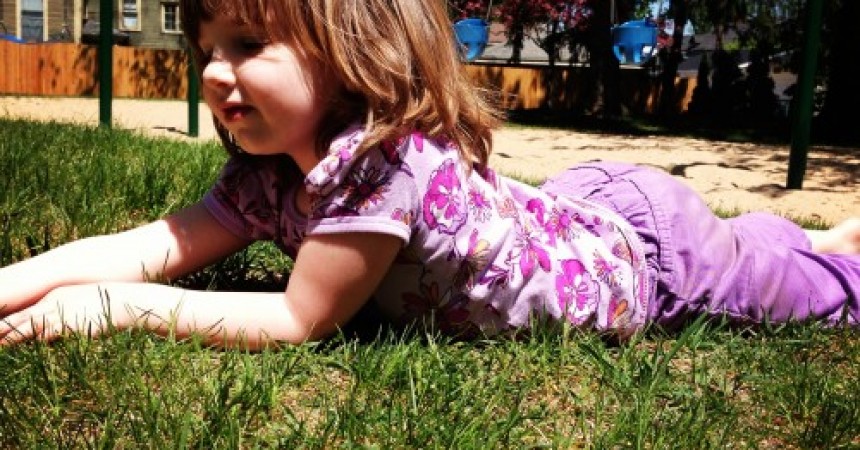 “It only takes one second…”

I can’t tell you how many times I’ve heard that statement, delivered to me as a somber warning not to ever (ever ever ever) take my eyes off my kids, even for the briefest moment.

At the grocery store. At the park. On my block. In my own backyard.

According to the 24-hour “horrible things shown all day long” news cycle, the world is a very dangerous place indeed. Best to keep our kids safely locked inside, or at scheduled activities overseen by trained adults. Roaming the neighborhood like we once did as children? So risky. Anything could happen!

But here’s what I believe: life itself is risky. 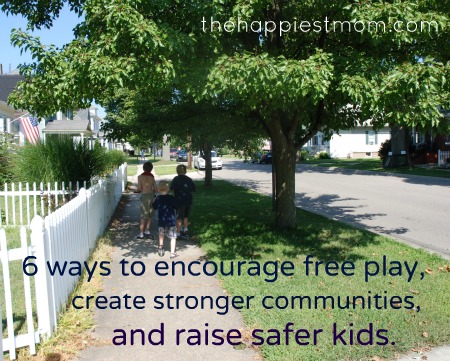 Risk cannot be eliminated without eliminating life. And avoiding risk too strenuously could actually create new risks (a parallel between the childhood obesity ‘epidemic’ and the increase in sedentary, indoor childhoods, perhaps…)

As I write this, there are seven kids – some mine, some neighborhood kids – ages roughly 5 – 8, running around in the yard next to my office window. At the moment they seem to be playing some sort of ninja-training game; five minutes ago they were riding their scooters up and down the sidewalk. They know how far they are allowed to go in either direction and do a nice job policing one another.

And yeah, the existence of this little gang makes me a happier mom, too. For one thing, as you can see I’m sitting peacefully at my desk in a quiet house (Clara is down for her nap) and I’m getting stuff done. You don’t have to do as much “entertaining” when the outdoors is your child’s playground, so a gang of neighborhood kids = an easier job for me.

Plus, I’m happy when I see my kids having fun, stretching their wings, using their imaginations and getting to know other people in our community.

But encouraging this kind of thing isn’t always easy today, when stricter social parenting standards and a higher sense of danger – either real or perceived – puts the pressure on us to keep our kids indoors . Here are six ways I’ve found to encourage safety in numbers.

Families today have less downtime than we had when I was growing up, and I feel like we tend to guard it more jealously as a result. We don’t much like kids or their parents just “stopping by.” What about the dishes stacked up in the sink? But to some extent I feel like I have to get over my aversion to “drop-ins” in order to encourage kids to come play these days. Life is simply too unpredictable (and frankly, I’m too lazy) to pre-schedule playdates; so I’ve told the parents of kids in a two-block radius that they’re free to send their kids over to knock on the door any time during normal conscious hours (which for us means after 9 AM in the summer!)With an open-door policy rather than scheduled playdates, you do have to be willing to set firm boundaries. For example, I have to tell the kids when my boys aren’t able to play for whatever reason (and then get firm if they keep hovering around the yard or ring the doorbell over and over.) Be sure to communicate to the other parents if drop-ins are welcome, and if you work outside the home let them know what times you aren’t typically home so they can plan.

Be willing to be the go-to house.

Yes, your floors will get dirtier. Yes,  you will run out of Popsicles faster. But try to keep the end goal in mine. I’m lucky enough that the kids in my little boys’ play circle are equally happy to have playmates over, but being willing to do my fair share (or if necessary, more than my fair share) of hostessing equals more play for everyone.

There’s often an uncomfortable dance between moms who’ve recently met (but whose kids have become fast friends.) “We should really get the kids together sometime…” “Sure, I’ll call you…” Let’s face it, too often that phone call is never made. I’ve taken to jumping the gun and setting a specific, on-the-spot invitation – sometimes I even offer to take the kids home with us right then. The other parents almost always return the favor soon after and it takes the awkwardness out of that first playdate.

One of my son’s best friends, Wyatt, is at a home-based daycare until 5, and it can be tricky to get the two boys together in the evenings. Since Owen is often moping around looking for “somebody to pway wif” during the day, I’ll often send Wyatt’s mom a quick email in the morning asking if I can swing by and pick him up from daycare so he can come play. She places a quick call to the daycare provider, I run over and pick Wyatt up, the two boys play their little hearts out until Wyatt’s mom comes to pick him up. Win-win-win. You can also be sure to include the kids of working-outside-the-home parents by allowing “drop-ins” in the evenings or making a point of getting to know parents who are away from home during the day.

One day I was surprised to see a little boy who is one of William’s best friends playing in a yard right around the corner from my house. Turns out, his great-grandma lives there, and since his parents both work during the day he and his little brother (Owen’s age) split their time between Grandma and Great-Grandma’s house during the day. Now that the two grandmas know we are so close by – and the boys do too – the boys spend much of their day running back and forth between the two houses. Another win-win-win. I’ve become much more proactive about talking with grandmothers at school events and on the bleachers at baseball practice. They are often home during the day, frequently play a large role in their grandkids’ lives, and you never know – they might live just a few doors down.

A family of four boys lives just two doors down from us, which is a play bonanza for my boys. But they’re a homeschooling family, so sending my kids over to just “drop in” doesn’t really work – they’re frequently gone to activities, and when they are home, they’re often doing school. Their mom and I have started keeping in touch almost exclusively via text, which cuts into both of our days less than one of those artificially-drawn-out phone calls would, allows us to communicate important factoids like “Doing lesson right now, send kids at 1:00” or “Yours just left.”

What are you doing to make your neighborhood a safer place for all kids?