Want to hear the author read this post aloud? Check it out on The Mom Hour podcast here! 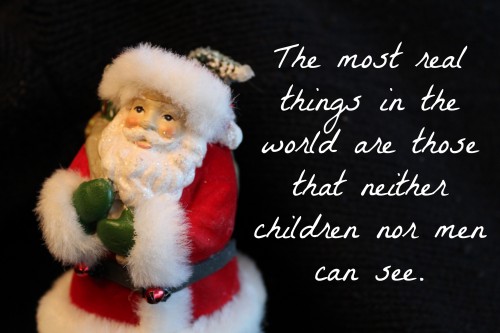 ‘Tis the season, moms – to take sides on any number of holiday-themed debates du jour: To Elf or not to Elf? Fake tree or real? Listen to Christmas music before Thanksgiving or no way? Black Friday or Cyber Monday or Small Business Saturday? Holiday baking from scratch or from a mix?

And the big one: Is Santa Claus a treasured part of childhood Christmas or a commercial lie that threatens the holiness of the season and may damage our kids?

I personally make a terrible soldier in any mommy war (or even lighthearted debate), because I can almost always see both sides. We get a real tree but I can totally see the upsides to a fake. I don’t play Christmas music in the house until after Thanksgiving but I’ll bop along merrily if it’s on in the store.

And while Santa is beloved and believed in by my children, I can relate to parents who are uncomfortable perpetuating a story that involves a pretty creative interpretation of the truth, or who resent the pressure to keep up with a hyper-commercialized 21st century version of the old St. Nicholas tale.

My feelings about the Santa debate are heavily influenced by my 4-year-old’s personality. She’s cautious, naturally skeptical, highly inquisitive and extremely literal. When you combine that with my own tendency to intellectualize, to explain, and to reason my way out of life’s big questions, we make a pretty unromantic pair. Last year, at three, she asked me point-blank whether the Santa at the mall was “just a normal guy dressed up in a costume,” and I answered her, unequivocally, that in fact he was. She had recently been through a typical bout of Halloween-inspired anxiety about costumed characters and imaginary villains and we’d spent many weeks assuring her that vampires and witches were totally pretend. It just didn’t feel right to turn around and swear up and down that the dude in the red suit was the real deal.

On the other hand, I want her to believe. Oh, do I want her to believe. I’m not so hung up on telling the truth that I can’t allow for a little storytelling and magic-making as part of Christmas parenting. I have deliciously fond and very real memories of the Santa I believed in as a child, and I don’t for a second regret that my parents stretched the truth a little to give me that experience.

In the end I come down on the side of Christmas magic. I believe in it, I’ve witnessed its awesome power over the young and not-so-young alike, and I desperately want to extend its stay in my home. So as I fumble my way through my fifth Christmas as a mom, I continue to seek that balance between my personal need to be as truthful with my kids in December as I am the rest of the year and my desire to give them a Santa experience to enjoy and remember.

Here are some of the ways we keep the Santa magic alive in our house without totally lying to our kids:

It’s easy to feel like we’re supposed to have a clear-cut answer for every question tossed up from the back seat of the car. But if you have preschoolers you know that you’d need Ph.D.’s in multiple subjects to keep up with the natural curiosity of a 4-year-old. My personal approach has always been to own up when I don’t know the answer to something (to which their reply is usually, “let’s ask Daddy” or – even better – “Mom, can you ask Siri?”).

With Santa it’s no different. Depending on the question, I rotate through a few options that seem to satisfy them and, more importantly to me, keep their imaginations working (because, I believe, that’s where the answers lie anyway). My answers usually start with one of these:

Answering Santa questions this way makes it easier on me in a couple of ways. One, it feels truthful and that just sits better with me. These are answers I can stand behind, and that can’t be proven wrong by preschoolers comparing notes on the playground. And two, it’s a lot easier than remembering an elaborate explanation about how elves make the exact same toys we’ve seen in Target – which, in the end, isn’t probably something they care that much about in the first place.

Find him in stories

Santa may not be real, but the place that books and stories take us is. I know that the Santa of my mind’s eye looks most like the one in the 1970’s paperback version of The Night Before Christmas. That close-up illustration of him wreathed in pipe smoke? That’s my personal mental-Santa-image – and it’s totally real.

I’ve found that the more books we read that incorporate some element of the Santa story, the more options our collective imaginations have to experience the narrative. One of our current favorites is The Christmas Magic, in which there is no Mrs. Claus and nary an elf in sight, and – most disturbing to my 2-year-old at first – Santa wears a dark blue coat and Merlin-esque hat. But oh, the illustrations and the language and the sweet details on every page – it’s hard not to believe that this is just how it is at the North Pole.

Kids are used to being totally transported by stories – they are real because the experience of reading them is real. Stories require a willing suspension of disbelief, something children are uniquely capable of. And I find that the more we read (and re-read) our favorite Santa stories, the more examples of possibility we have to draw on when we get into a discussion about the magic and mystery of Christmas.

Keep it simple, and part of a bigger Christmas experience

21st century believers get to choose from so many different ways to “do Santa.” They can sit on his lap at the mall. They can have an Elf. They can track him online. They can mail him (or email him, or text him) their wish list. They can have breakfast with him at a fancy hotel, or see his workshop in person after a Polar Express-inspired train ride (that’s a super popular one where I live).

I understand the desire to bring Santa to life and make him a tangible and thrilling part of the season; I just know that for my kids, a little goes a long way. The last two years we have done the mall Santa experience on a weekday morning when no one else was around. No line, no big deal if the toddler balked at the last minute, and no rush for the 4-year-old to explain her heart’s desire to the big man. It was commercial, yes (and I forked over $22.50 for the photo you see below), but it was probably the only thing like that that we’ll do this year.

I guess I feel like just because these options are available doesn’t mean we have to do them ALL. Even if you could afford to opt in to every Santa-related experience your town has to offer, it seems to me that the more of these types of things we do the more probing questions we get from our kids (and the less there is left to the imagination). Choosing carefully which of these activities we do is another way I think we preserve a little bit of the mystery of the Santa story. As our family grows and if the kids want to, maybe we’ll incorporate a few more ways to experience Santa throughout the season, but my hope is that believing doesn’t always require seeing – and that, in fact, the less we see firsthand the more deeply they’ll believe.

Let the child be your guide

Here’s my real secret to keeping the Santa story alive in our house without feeling like I’m complicit in a big, fat, jolly red lie: I don’t really bring it – or him – up at all.

I answer their questions in the ways I talked about earlier. I’ll read any story they ask me to. And, when it makes sense and their desire leads us to, we’ll do something fun like sit on his lap at the mall. But I don’t initiate – I don’t remind them that he’s watching their behavior, I don’t prompt them to come up with a list or write a letter, and I have thus far kept our home Elf-free.

Sound grinchy and paranoid? Maybe. But it works for me. By following their lead, I get to see a vision of Santa Claus develop over the course of the season as just one magical piece of a Christmas experience that also includes the story of a miraculous birth, and a festival of lights celebrated by many of our friends.

It’s not like I’m censoring – I love a little Santa in our lives this time of year – I just don’t think it’s my job to bring him up at every opportunity, defend every detail of his habits and whereabouts, and participate in every chance to sit on his lap for $40 a pop. And in releasing myself from being the steward of Santa magic, I actually think I’m leaving him open to more imagination, interpretation and ultimately more enjoyment for my kids.

When the day comes for my oldest to know a more adult version of the truth, I hope this approach will make that transition easier. I hope the knowledge that Christmas is a time of miracles – magic and mystery and things we cannot hope to fully understand – softens whatever blow the news brings with it and allows her to continue to sense the season’s mysteries and help make them real for her younger siblings.

I hope she’ll see that there is truth in the Santa story – the truth of wishing and hoping, of secrets and surprises, of giving and receiving – and that no matter who really bought and wrapped the presents under the Christmas tree, the love that brought them there is undeniably real.

The most real things in the world are those that neither children nor men can see. Did you ever see fairies dancing on the lawn? Of course not, but that’s no proof that they are not there. Nobody can conceive or imagine all the wonders there are unseen and unseeable in the world.

– Francis Pharcellus Church, Yes, Virginia, there is a Santa Claus

Do you have Santa skeptics in your house? How do you answer their questions and maintain the mystery?