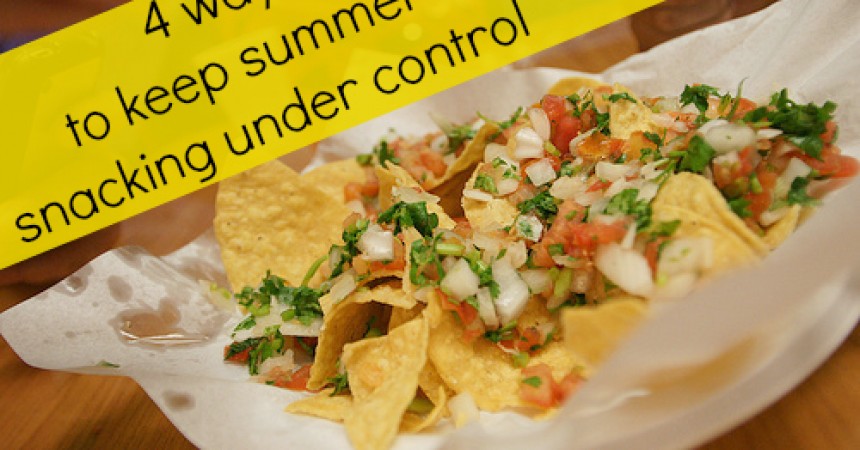 “Mom, I’m hungry!” Okay, so I understand that boredom, lack of structure and proximity to the kitchen seems to ramp up a kid’s desire to nosh.  But constant (and, it seems, unnecessarily urgent) begging for something to eat – and usually something we don’t want them to have – can get really annoying, fast. Sometimes it can feel like the requests start around 7 AM and didn’t stop until bedtime.

And when we find ourselves giving in – or worse, saying “mm-hmm” – because they’ve worn us down with requests, we’re likely to let them snack on foods we don’t really want them to eat.

Last year I made a point of getting on top of summer snacking so that I’d be less stressed and my kids (and myself!) would eat more healthily all summer long. Here are some of the ideas I put into play:

1)   Put out fruit and veggies first.

This strategy works: once you fill up a little on celery sticks or carrots, you just don’t want as much junk food.

But when you’re starving and waiting for the chicken to come off the grill, it’s only too easy to scarf down a bowl of chips without even thinking about it. And when chips and carrots are put out at the same time, the chips are usually gonna win.

So I’ve been making a point of leaving less-healthy snacks in the pantry until after the kids and I have both had a chance to graze on healthier fare. If something’s not right in front of us, it’s a lot less tempting. And by the time I break out the snacks, we’re full enough on the good stuff that we don’t binge.

The same goes for daily snacking!  I keep a bowl of in-season fruit on the dining-room table and on the top shelf of the fridge, and it’s always the first place I direct the kids for between-meal snacks.

With a more relaxed summer schedule, it’s easy to slip and start grabbing fast food for lunch a few times a week because the kids are tired of turkey sandwiches, or going out for ice cream because it’s a fun outing.

But once those things become expectations, it’s a lot harder to steer the ship back toward healthier choices. So during the summer I have to be extra careful to make sure treats – like cookies, soda, and the like – remain treats and not a part of our daily diet.

It doesn’t have to be a tight schedule, but having some idea of when meals and snacks (other than fruit or veggies, which in my house are always green-lighted) might be available helps my kids feel less urgent about those beginning hunger grumbles. It also makes serving up snacks and meals less crazy-making for me: I can say “I’ll make you a snack around 4 PM!” instead of fielding a constant flow of requests.

As a general rule, I don’t buy packages of cookies or the kind of sugary cereal that turns milk chocolate-flavored. But every now and then, I surprise the kids with a completely unexpected snack, and place no expectations on how it will be consumed: (in fact, I pretty much expect that it’ll be gone within the day. )

That way, I’m happy because I don’t have to police the treat or deal with begging. The kids are happy because they got to splurge on a semi-forbidden snack without Mom breathing down their necks. And in the end, the result is the same as if I’d rationed it out: they still won’t get it again for several weeks.

Creating a system to keep snacking under control takes a little extra work and thought, but it’s totally worth it. Because knowing my kids are snacking in a healthy way – and not being Cranky Mom due to constant begging – makes us all a lot happier.